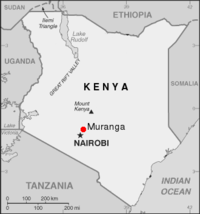 Murang'a is a town in Central Province
Central Province (Kenya)
Kenya's Central Province covers an area of 13,191 km² and is located to north of Nairobi and west of Mt. Kenya. The province had 4,383,743 inhabitants according to the 2009 census...
of Kenya
Kenya
Kenya , officially known as the Republic of Kenya, is a country in East Africa that lies on the equator, with the Indian Ocean to its south-east...
. The town was previously called Fort Hall. It is the administrative centre of Murang'a District and is mainly inhabited by the Kikuyu community.
According to the 1999 census, the town has a population of about 11,021.

It is located between Nyeri
Nyeri
Nyeri is a town in situated in the Central Highlands of Kenya Kenya, which was the administrative headquarters of the country's former Central Province...
and Thika
Thika
Thika is an industrial town in Central Province, Kenya, lying on the A2 road 40 km north east of Nairobi, near the confluence of Thika River & Chania River. Thika has a population of 200,000and is growing rapidly, as is the entire greater Nairobi area...
. The town of Maragua
Maragua
Maragua is a town in the Central Province of Kenya. It is the capital of the Maragua District. The town is located along Thika–Sagana road just 10 km south of Murang'a. Maragua town has an urban population of 4,286 and a total population of 27,384 . Norwegian-Kenyan singer Stella Mwangi was...
is located 10 kilometres south of Murang'a while Sagana
Sagana
Sagana is a small town in Kirinyaga District, Central, Kenya. It is along the Nairobi-Nyeri highway, 100 kilometres north of Nairobi, the capital of Kenya. Its name comes from Kenyas longest river, Tana River which is also called Thagana.- See also :...
town is 15 kilometres northeast of Murang'a.
It lies on latitude of -0.7167 (0° 43’ O) and longitude of 37.1500 (37° 8’ 60E)
The town itself lies low, a bit hilly, small but picturesque with an altitude of 4120 ft (1255 meters) above sea level. As a result of the varying altitudes, Murang'a can get quite cold during the from May to Mid-August, including experiencing hale. To the west of the town can be seen the rolling Kikuyu farmlands that extend as far as the eyes can see.

Murang'a is a fast-growing town that attracts traders and farmers from the neighboring districts. It has banks, petrol stations, post office, lodges, nightclubs playing latest local and western music, restaurants serving local and exotic dishes, supermarkets, dry cleaners and lively markets places. It has also a relatively busy bus and matatu
Matatu
In Kenya and neighboring nations matatu are privately owned minibuses although pick-up trucks were in the past pressed into service as these East African share taxis. Often decorated, many matatu feature portraits of the famous or slogans and sayings, some religious.These minibuses ply set routes,...
transportation terminal.There is also a district general hospital located in the northern corner of the town. The town is accessible from Nairobi
Nairobi
Nairobi is the capital and largest city of Kenya. The city and its surrounding area also forms the Nairobi County. The name "Nairobi" comes from the Maasai phrase Enkare Nyirobi, which translates to "the place of cool waters". However, it is popularly known as the "Green City in the Sun" and is...
by Thika-Murang'a road and from Nyeri
Nyeri
Nyeri is a town in situated in the Central Highlands of Kenya Kenya, which was the administrative headquarters of the country's former Central Province...
.
The source of this article is wikipedia, the free encyclopedia.  The text of this article is licensed under the GFDL.