Encyclopedia
A Multiple barrel firearm is a firearm of any type with more than one barrel, usually to increase the rate of fire/hitting probability and to reduce barrel erosion/overheating.

Multiple barrel firearm is a firearm of any type with more than one barrel usually in the same calibre, to increase the rate of fire/hitting probability and to reduce barrel erosion/overheating. Originally a primitive (and with the invention of the Gatling gun
Gatling gun
The Gatling gun is one of the best known early rapid-fire weapons and a forerunner of the modern machine gun. It is well known for its use by the Union forces during the American Civil War in the 1860s, which was the first time it was employed in combat...
, successful) attempt of rapid fire before the introduction of belt-feed/magazines and automatic weapons. Project SALVO revealed that any Multi Barrel Assault Rifle/Machine Gun with a rifle calibre above 5.56 x 45 mm NATO
5.56 x 45 mm NATO
5.56×45mm NATO is a rifle cartridge developed in the United States and originally chambered in the M16 rifle. Under STANAG 4172, it is a standard cartridge for NATO forces as well as many non-NATO countries. It is derived from, but not identical to, the .223 Remington cartridge...
and the possible exception of Pistol/Intermediate rounds (IE: 9 x 19 mm Parabellum, .30 Carbine
.30 Carbine
The .30 Carbine is the cartridge used in the M1 Carbine introduced in the 1940s. It is an intermediate round designed to be fired from the M1 carbine's 18-inch barrel.-History:...
, 7.62 x 39 mm M43) is unsuitable for infantry use. 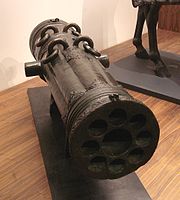 Multiple barrel firearms date back to the 1300s, when the first Volley gun
Volley gun
A volley gun is a gun with several barrels for firing a number of shots, either simultaneously or in sequence. They differ from modern machine guns in that they lack automatic loading and automatic fire and are limited by the number of barrels bundled together.In practice the large ones were not...
s were developed. Originally a primitive attempt of rapid fire before the introduction of belt-feed/magazines and automatic weapons, the application of multiple barrels to modern automatic weapons such as the M134 Minigun have effective performance on the battlefield.
The source of this article is wikipedia, the free encyclopedia.  The text of this article is licensed under the GFDL.