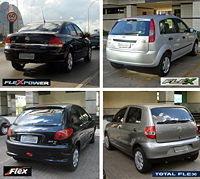 Multifuel, sometimes spelled multi-fuel, is a term applied to any type of engine
Engine
An engine or motor is a machine designed to convert energy into useful mechanical motion. Heat engines, including internal combustion engines and external combustion engines burn a fuel to create heat which is then used to create motion...
, boiler
Boiler
A boiler is a closed vessel in which water or other fluid is heated. The heated or vaporized fluid exits the boiler for use in various processes or heating applications.-Materials:...
, or heater
Heater
A heater is an object that emits heat or causes another body to achieve a higher temperature. In a household or domestic setting, heaters are usually appliances whose purpose is to generate heating...
or other fuel-burning device which is designed to burn multiple types of fuels in its operation. One common application of multifuel technology is in military settings, where the normally-used diesel or gas turbine fuel might not be available during combat operations for vehicles or heating units. However, the growing need to establish fuel sources other than petroleum
Petroleum
Petroleum or crude oil is a naturally occurring, flammable liquid consisting of a complex mixture of hydrocarbons of various molecular weights and other liquid organic compounds, that are found in geologic formations beneath the Earth's surface. Petroleum is recovered mostly through oil drilling...
for transportation, heating, and other uses has led to increased development of multifuel technology for non-military use as well.

A multifuel engine is constructed so that its compression ratio
Compression ratio
The 'compression ratio' of an internal-combustion engine or external combustion engine is a value that represents the ratio of the volume of its combustion chamber from its largest capacity to its smallest capacity...
permits firing the highest octane
Octane
Octane is a hydrocarbon and an alkane with the chemical formula C8H18, and the condensed structural formula CH36CH3. Octane has many structural isomers that differ by the amount and location of branching in the carbon chain...
fuel of the various accepted alternative fuels. A strengthening of the engine is necessary in order to meet these higher demands. Multifuel engines sometimes have switch settings that are set manually to take different octanes, or types, of fuel.

One common use of this technology is in the drive of military vehicles, so that they may run a wide range of alternative fuels such as gasoline or aviation (gas turbine) fuel. This is seen as desirable in a military setting as enemy action or unit isolation may limit the available fuel supply, and conversely enemy fuel sources, or civilian sources, may become available for usage.

Currently a wide range of Russian military vehicles employ multifuel engines, such as the T-72
T-72
The T-72 is a Soviet-designed main battle tank that entered production in 1970. It is developed directly from Obyekt-172, and shares parallel features with the T-64A...
tank (multifuel diesel) and the T-80
T-80
The T-80 is a main battle tank designed and manufactured in the former Soviet Union. A development of the T-64, it entered service in 1976 and was the first production tank to be equipped with a gas turbine engine for main propulsion.the Swedish Stridsvagn 103 of 1971 used a gas turbine alongside...
(multifuel gas turbine).

Many other types of engines and other heat-generating machinery are designed to burn more than one type of fuel. For instance, some heaters and boilers designed for home use can burn wood, pellets, and other fuel sources. These offer fuel flexibility and security, but are more expensive than are standard single fuel engines. Portable stoves are sometimes designed with multifuel functionality, in order to burn whatever fuel is found during an outing.

Multifuel engines are not necessarily underpowered, but in practice some engines have had issues with power due to design compromises necessary to burn multiple types of fuel in the same engine. Perhaps the most notorious example from a military perspective is the L60 engine used by the British Chieftain Main Battle Tank
Chieftain tank
The FV 4201 Chieftain was the main battle tank of the United Kingdom during the 1960s and 1970s. It was one of the most advanced tanks of its era, and at the time of its introduction in 1966 had the most powerful main gun and heaviest armour of any tank in the world...
, which resulted in a very sluggish performance -- in fact, the Mark I Chieftain (used only for training and similar activities) was so underpowered that some were incapable of mounting a tank transporter. An equally serious issue was that changing from one fuel to another often required hours of preparation.
The source of this article is wikipedia, the free encyclopedia.  The text of this article is licensed under the GFDL.