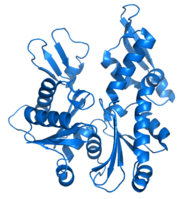 MreB is a protein found in bacteria that has been identified as a homologue
Homology (biology)
Homology forms the basis of organization for comparative biology. In 1843, Richard Owen defined homology as "the same organ in different animals under every variety of form and function". Organs as different as a bat's wing, a seal's flipper, a cat's paw and a human hand have a common underlying...
of actin
Actin
Actin is a globular, roughly 42-kDa moonlighting protein found in all eukaryotic cells where it may be present at concentrations of over 100 μM. It is also one of the most highly-conserved proteins, differing by no more than 20% in species as diverse as algae and humans...
, as indicated by similarities in tertiary structure
Tertiary structure
In biochemistry and molecular biology, the tertiary structure of a protein or any other macromolecule is its three-dimensional structure, as defined by the atomic coordinates.-Relationship to primary structure:...
and conservation of active site peptide sequence. The conservation of protein structure suggests the common ancestry
Common descent
In evolutionary biology, a group of organisms share common descent if they have a common ancestor. There is strong quantitative support for the theory that all living organisms on Earth are descended from a common ancestor....
of the cytoskeletal
Cytoskeleton
The cytoskeleton is a cellular "scaffolding" or "skeleton" contained within a cell's cytoplasm and is made out of protein. The cytoskeleton is present in all cells; it was once thought to be unique to eukaryotes, but recent research has identified the prokaryotic cytoskeleton...
elements formed by actin, found in eukaryote
Eukaryote
A eukaryote is an organism whose cells contain complex structures enclosed within membranes. Eukaryotes may more formally be referred to as the taxon Eukarya or Eukaryota. The defining membrane-bound structure that sets eukaryotic cells apart from prokaryotic cells is the nucleus, or nuclear...
s, and MreB, found in prokaryote
Prokaryote
The prokaryotes are a group of organisms that lack a cell nucleus , or any other membrane-bound organelles. The organisms that have a cell nucleus are called eukaryotes. Most prokaryotes are unicellular, but a few such as myxobacteria have multicellular stages in their life cycles...
s. Indeed, recent studies have found that MreB proteins polymerize
Polymerization
In polymer chemistry, polymerization is a process of reacting monomer molecules together in a chemical reaction to form three-dimensional networks or polymer chains...
to form filaments that are similar to actin microfilament
Microfilament
Microfilaments are the thinnest filaments of the cytoskeleton, a structure found in the cytoplasm of all eukaryotic cells. These linear polymers of actin subunits are flexible and relatively strong, resisting buckling by multi-piconewton compressive forces and filament fracture by nanonewton...
s.

MreB controls the width of rod-shaped bacteria
Bacteria
Bacteria are a large domain of prokaryotic microorganisms. Typically a few micrometres in length, bacteria have a wide range of shapes, ranging from spheres to rods and spirals...
, such as Escherichia coli
Escherichia coli
Escherichia coli is a Gram-negative, rod-shaped bacterium that is commonly found in the lower intestine of warm-blooded organisms . Most E. coli strains are harmless, but some serotypes can cause serious food poisoning in humans, and are occasionally responsible for product recalls...
. A mutant
Mutant
In biology and especially genetics, a mutant is an individual, organism, or new genetic character, arising or resulting from an instance of mutation, which is a base-pair sequence change within the DNA of a gene or chromosome of an organism resulting in the creation of a new character or trait not...
E. coli that creates defective MreB proteins will be spherical instead of rod-like. Also, bacteria that are naturally spherical do not have the gene
Gene
A gene is a molecular unit of heredity of a living organism. It is a name given to some stretches of DNA and RNA that code for a type of protein or for an RNA chain that has a function in the organism. Living beings depend on genes, as they specify all proteins and functional RNA chains...
encoding MreB. Prokaryotes carrying the mreB gene can also be helical
Helix
A helix is a type of smooth space curve, i.e. a curve in three-dimensional space. It has the property that the tangent line at any point makes a constant angle with a fixed line called the axis. Examples of helixes are coil springs and the handrails of spiral staircases. A "filled-in" helix – for...
in shape. MreB has long been thought to form a helical filament underneath the cytoplasmic membrane, however, this model has been brought into question by three recent publications showing that filaments cannot be seen by electron cryotomography and that GFP-MreB can be seen as patches moving around the cell circumference. It has been shown to interact with several proteins that are proven to be involved in length growth (for instance PBP2). Therefore, it probably directs the synthesis and insertion of new peptidoglycan building units into the existing peptidoglycan layer to allow length growth of the bacteria.