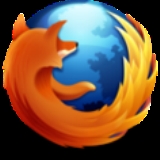 Overview
Mozilla Firefox is a free and open source
Free and open source software
Free and open-source software or free/libre/open-source software is software that is liberally licensed to grant users the right to use, study, change, and improve its design through the availability of its source code...
web browser
Web browser
A web browser is a software application for retrieving, presenting, and traversing information resources on the World Wide Web. An information resource is identified by a Uniform Resource Identifier and may be a web page, image, video, or other piece of content...
descended from the Mozilla Application Suite
Mozilla Application Suite
The Mozilla Application Suite is a cross-platform integrated Internet suite. Its development was initiated by Netscape Communications Corporation, before their acquisition by AOL. It is based on the source code of Netscape Communicator...
and managed by Mozilla Corporation
Mozilla Corporation
The Mozilla Corporation is a wholly owned subsidiary of the Mozilla Foundation that coordinates and integrates the development of Internet-related applications such as the Mozilla Firefox and SeaMonkey Navigator web browsers and the Mozilla Thunderbird email client by a growing global community of...
. , Firefox is the second most widely used browser, with approximately 25% of worldwide usage share of web browsers
Usage share of web browsers
The usage share of a web browser is the proportion, often expressed as a percentage, of users of all web browsers who use that particular browser. This figure can only be estimated, typically by determining the proportion of visitors to a group of websites that use a particular web browser...
. The browser has had particular success in Germany
Germany
Germany , officially the Federal Republic of Germany , is a federal parliamentary republic in Europe. The country consists of 16 states while the capital and largest city is Berlin. Germany covers an area of 357,021 km2 and has a largely temperate seasonal climate...
and Africa
Africa
Africa is the world's second largest and second most populous continent, after Asia. At about 30.2 million km² including adjacent islands, it covers 6% of the Earth's total surface area and 20.4% of the total land area...
, where it is the most popular browser with 50% and 35% usage respectively.

To display web pages, Firefox uses the Gecko
Gecko (layout engine)
Gecko is a free and open source layout engine used in many applications developed by Mozilla Foundation and the Mozilla Corporation , as well as in many other open source software projects....
layout engine
Layout engine
A web browser engine, , is a software component that takes marked up content and formatting information and displays the formatted content on the screen. It "paints" on the content area of a window, which is displayed on a monitor or a printer...
, which implements most current web standards
Web standards
Web standards is a general term for the formal standards and other technical specifications that define and describe aspects of the World Wide Web. In recent years, the term has been more frequently associated with the trend of endorsing a set of standardized best practices for building web sites,...
in addition to several features that are intended to anticipate likely additions to the standards.

Features include tabbed browsing
Tab (GUI)
In the area of graphical user interfaces , a tabbed document interface is one that allows multiple documents to be contained within a single window, using tabs as a navigational widget for switching between sets of documents...
, spell checking
Spell checker
In computing, a spell checker is an application program that flags words in a document that may not be spelled correctly. Spell checkers may be stand-alone capable of operating on a block of text, or as part of a larger application, such as a word processor, email client, electronic dictionary,...
, incremental find
Incremental find
In computing, incremental search, incremental find or real-time suggestions is a user interface interaction method to progressively search for and filter through text. As the user types text, one or more possible matches for the text are found and immediately presented to the user...
, live bookmarking, a download manager
Download manager
A download manager is a computer program dedicated to the task of downloading possibly unrelated stand-alone files from the Internet for storage...
, private browsing
Privacy mode
Privacy mode, sometimes informally referred to as "porn mode", or "private browsing" is a term that refers to privacy features in some web browsers. Historically speaking, web browsers store information such as browsing history, images, videos and text within cache...
, location-aware browsing (also known as "geolocation
Geolocation
Geolocation is the identification of the real-world geographic location of an object, such as a radar, mobile phone or an Internet-connected computer terminal...
") based exclusively on a Google
Google
Google Inc. is an American multinational public corporation invested in Internet search, cloud computing, and advertising technologies. Google hosts and develops a number of Internet-based services and products, and generates profit primarily from advertising through its AdWords program...
service and an integrated search system that uses Google by default in most localizations.

How do I get my usage on Firefox?

Why am I having to initiate my firefox icon several times to get a response from Mozila? Can anyone heelp me with this problem?

I cant find "tools" for my mozilla/yahoo homepage. I need to remove a toolbar from my homepage
More
x