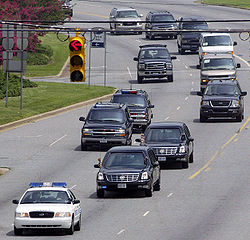 A motorcade is a procession of vehicles. The term motorcade was coined by Lyle Abbot (in 1912 or 1913 when he was automobile editor of the Arizona Republican), and is formed after cavalcade
Cavalcade
Cavalcade may refer to:*Cavalcade, a horseback procession, parade, or mass trail ride*A huge parade*A huge procession*Suzuki GV1400 Cavalcade, a Suzuki luxury touring motorcycle available from 1985 to 1988 in North America...
on the false notion that "-cade" was a suffix meaning "procession". In fact, there is no such suffix in either French or Latin, although -cade has now since become a productive suffix
Productivity (linguistics)
In linguistics, productivity is the degree to which native speakers use a particular grammatical process, especially in word formation. Since use to produce novel structures is the clearest proof of usage of a grammatical process, the evidence most often appealed to as establishing productivity is...
in English, leading to the alternative names carcade, autocade, and even Hoovercade (after J. Edgar Hoover
J. Edgar Hoover
John Edgar Hoover was the first Director of the Federal Bureau of Investigation of the United States. Appointed director of the Bureau of Investigation—predecessor to the FBI—in 1924, he was instrumental in founding the FBI in 1935, where he remained director until his death in 1972...
). Eric Partridge
Eric Partridge
Eric Honeywood Partridge was a New Zealand/British lexicographer of the English language, particularly of its slang. His writing career was interrupted only by his service in the Army Education Corps and the RAF correspondence department during World War II...
called the name a "monstrosity", and Lancelot Hogben
Lancelot Hogben
Lancelot Thomas Hogben FRS was a versatile British experimental zoologist and medical statistician. He is best known for developing Xenopus laevis as a model organism for biological research in his early career, attacking the eugenics movement in the middle of his career, and popularising books on...
considered the word to be a "counterfeit coinage". The original suffix in cavalcade is actually "-ade".

A funeral cortege is a procession of mourners, most often in a motorcade of vehicles following a hearse
Hearse
A hearse is a funerary vehicle used to carry a coffin from a church or funeral home to a cemetery. In the funeral trade, hearses are often called funeral coaches.-History:...
.

Motorcades can be used as protests and demonstrations. A large, organised, group of vehicles will travel a busy route at very slow speed in order to deliberately cause traffic disruption. This is a tactic most often associated with protest groups that have access to many large vehicles, such as truckers and farmers. An example is the 2005 UK protests against fuel prices.

Motorcades can be used to transport a very important person
Very Important Person
A Very Important Person, or VIP is a person who is accorded special privileges due to his or her status or importance.Examples include celebrities, heads of state/heads of government, major employers, high rollers, politicians, high-level corporate officers, wealthy individuals, or any other...
, usually a political figure. Such a procession consists of several vehicles, usually accompanied by law enforcement support and additional protection to ensure the safety of the people in the motorcade. Motorcades for presidents and heads of state consist of anywhere from four to six armoured cars or SUVs, with police motorcycles and cars leading the way and following.

Depending on the size of the motorcade and who it is carrying, routes may be completely blockaded from the general public. For security, this is common with motorcades for heads of state or government.


President of the United States

A police presence precedes the beginning of the presidential motorcade. These cars and motorcycles usually drive ahead to clear the way and block traffic.

The motorcade for the president is made up of two parts, the first being the "secure package". In the event of an emergency, the secure package separates from the rest of the group. It includes two limousines, is heavily guarded by local law enforcement and Secret Service, with all cars driven by professional drivers.

The second part is made up of vans that transport White House staff members and selected members of the press. In the rear is the WHCA Roadrunner
WHCA Roadrunner
The White House Communications Agency Roadrunner Vehicle is an element of every American presidential motorcade. It is also known as the MC2V...
communications van – which provides the primary communications path via satellite, allowing bi-directional voice, data and streaming video – an ambulance
Ambulance
An ambulance is a vehicle for transportation of sick or injured people to, from or between places of treatment for an illness or injury, and in some instances will also provide out of hospital medical care to the patient...
, and additional police vehicles.

Motorcade routes are selected by Secret Service agents in cooperation with local police forces. Escape routes are also established in the event of an emergency.