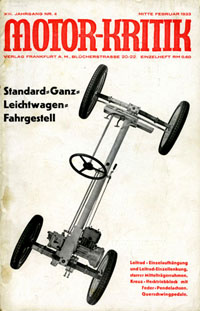 Publishing house H.Bechhold Verlagsbuchhandlung took over the unprofitable title Klein-Motor-Sport in 1927. In order to revitalize the magazine, the publisher assigned the young progressive engineer and critical automotive journalist Josef Ganz
Josef Ganz
Dipl.-Ing. Josef Ganz was a German-Hungarian car designer, born in Budapest, Hungary.-Early years:Josef Ganz was born in a Jewish family with a Hungarian mother and a German father in Budapest, the then second-largest city within the Austro-Hungarian Empire, on July 1, 1898. His father, Dr...
as editor-in-chief. He started as from the first issue of January 1928. Josef Ganz used Motor-Kritik as a platform to criticize heavy, unsafe and old-fashioned cars and promote innovative design. The magazine quickly gained in reputation and influence and, in January 1929, was renamed into the more appropriate title Motor-Kritik.

‘With the ardent conviction of a missionary’, so post-war Volkswagen director Heinrich Nordhoff
Heinrich Nordhoff
Heinz Heinrich Nordhoff was a German engineer famous for his leadership of the Volkswagen company as it was rebuilt after World War II....
would later say, ‘Josef Ganz in Motor-Kritik attacked the old and well-established auto companies with biting irony.’ These companies fought against Motor-Kritik with law-suits, slander campaigns and an advertising boycott. However, every new attempt for destruction only increased the publicity for the magazine and Josef Ganz firmly established himself as the leading independent automotive innovator in Germany.

As a Jew, however, Josef Ganz was forced to resign as editor-in-chief by the Gestapo in 1933. His position was taken over by his colleague Georg Ising, who remained editor-in-chief throughout the Second World War until the termination of the magazine in 1945.