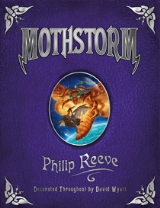 A mysterious cloud starts moving through the Solar System. A British ship is sent to Georgium Sidum to investigate, and finds giant moths and blue lizards. Most of the group is captured, but Arthur is saved by Jack's crew. They rescue Captain Moonfield, and with him they warn the Jovian System. It is revealed the lizards, called the Snilth, are led by a Rogue Shaper called the Mothmaker. They are able to repulse the first attack, but the Mothstorm then goes to Earth. Mrs Mumby and Arthur are able to destroy the Mothmaker with a formula Shapers use to destroy themselves after creating a system. It is revealed Ssilla is descended from a Snilth Queen who rebelled against the Mothmaker long ago, but had her clan slaughtered. Ssilla then becomes the Queen of the Snilth, and their minature Sun is towed into orbit around Hades (Neptune), which they inhabit. Meanwhile as a reward for Jack's services enough antidote
Antidote
An antidote is a substance which can counteract a form of poisoning. The term ultimately derives from the Greek αντιδιδοναι antididonai, "given against"....
is produced to turn back all the Venusian colonists.
The source of this article is wikipedia, the free encyclopedia.  The text of this article is licensed under the GFDL.