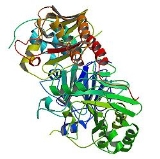 Encyclopedia
Mothers against decapentaplegic homolog 1 also known as SMAD family member 1 or SMAD1 is a protein
Protein
Proteins are biochemical compounds consisting of one or more polypeptides typically folded into a globular or fibrous form, facilitating a biological function. A polypeptide is a single linear polymer chain of amino acids bonded together by peptide bonds between the carboxyl and amino groups of...
that in humans is encoded by the SMAD1 gene
Gene
A gene is a molecular unit of heredity of a living organism. It is a name given to some stretches of DNA and RNA that code for a type of protein or for an RNA chain that has a function in the organism. Living beings depend on genes, as they specify all proteins and functional RNA chains...
.

SMAD1 belongs to the SMAD
SMAD (protein)
SMADs are intracellular proteins that transduce extracellular signals from transforming growth factor beta ligands to the nucleus where they activate downstream TGF-β gene transcription....
, a family of proteins similar to the gene products of the Drosophila
Drosophila
Drosophila is a genus of small flies, belonging to the family Drosophilidae, whose members are often called "fruit flies" or more appropriately pomace flies, vinegar flies, or wine flies, a reference to the characteristic of many species to linger around overripe or rotting fruit...
gene 'mothers against decapentaplegic
Mothers against decapentaplegic
Mothers against decapentaplegic is a protein from the SMAD family that was discovered in Drosophila.The SMAD proteins are homologs of both the Drosophila protein "mothers against decapentaplegic" and the C. elegans protein SMA. The name is a combination of the two...
' (Mad) and the C. elegans
Caenorhabditis elegans
Caenorhabditis elegans is a free-living, transparent nematode , about 1 mm in length, which lives in temperate soil environments. Research into the molecular and developmental biology of C. elegans was begun in 1974 by Sydney Brenner and it has since been used extensively as a model...
gene Sma. The name is a combination of the two. It was found that a mutation in the 'Drosophila' gene, MAD, in the mother, repressed the gene, decapentaplegic
Decapentaplegic
Decapentaplegic is a key morphogen involved in the development of the fruit fly Drosophila melanogaster. It is known to be necessary for the correct patterning of the fifteen imaginal discs, which are tissues that will become limbs and other organs and structures in the adult fly. It has also been...
, in the embryo. The phrase "Mothers against" was added as a humorous approach since mothers often form organizations opposing various issues e.g. Mothers Against Drunk Driving
Mothers Against Drunk Driving
Mothers Against Drunk Driving is a non-profit organization in the United States that seeks to stop drunk driving, support those affected by drunk driving, prevent underage drinking, and overall push for stricter alcohol policy...
or (MADD).