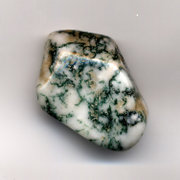 Moss agate is a semi-precious gemstone
Gemstone
A gemstone or gem is a piece of mineral, which, in cut and polished form, is used to make jewelry or other adornments...
formed from silicon dioxide
Silicon dioxide
The chemical compound silicon dioxide, also known as silica , is an oxide of silicon with the chemical formula '. It has been known for its hardness since antiquity...
. This mineral is commonly found in limestone and granite. It is a form of agate
Agate
Agate is a microcrystalline variety of silica, chiefly chalcedony, characterised by its fineness of grain and brightness of color. Although agates may be found in various kinds of rock, they are classically associated with volcanic rocks and can be common in certain metamorphic rocks.-Etymology...
which includes mineral
Mineral
A mineral is a naturally occurring solid chemical substance formed through biogeochemical processes, having characteristic chemical composition, highly ordered atomic structure, and specific physical properties. By comparison, a rock is an aggregate of minerals and/or mineraloids and does not...
s of a green colour embedded in the chalcedony
Chalcedony
Chalcedony is a cryptocrystalline form of silica, composed of very fine intergrowths of the minerals quartz and moganite. These are both silica minerals, but they differ in that quartz has a trigonal crystal structure, while moganite is monoclinic...
, forming filaments and other patterns suggestive of moss
Moss
Mosses are small, soft plants that are typically 1–10 cm tall, though some species are much larger. They commonly grow close together in clumps or mats in damp or shady locations. They do not have flowers or seeds, and their simple leaves cover the thin wiry stems...
. It also sometimes resembles blue-cheese. The field is a clear or milky-white quartz
Quartz
Quartz is the second-most-abundant mineral in the Earth's continental crust, after feldspar. It is made up of a continuous framework of SiO4 silicon–oxygen tetrahedra, with each oxygen being shared between two tetrahedra, giving an overall formula SiO2. There are many different varieties of quartz,...
, and the included minerals are mainly oxide
Oxide
An oxide is a chemical compound that contains at least one oxygen atom in its chemical formula. Metal oxides typically contain an anion of oxygen in the oxidation state of −2....
s of manganese
Manganese
Manganese is a chemical element, designated by the symbol Mn. It has the atomic number 25. It is found as a free element in nature , and in many minerals...
or iron
Iron
Iron is a chemical element with the symbol Fe and atomic number 26. It is a metal in the first transition series. It is the most common element forming the planet Earth as a whole, forming much of Earth's outer and inner core. It is the fourth most common element in the Earth's crust...
. Moss agate is of the white variety with green inclusions that resemble moss. It occurs in many locations. The colors are formed due to trace amounts of metal present as an impurity, such as chrome or iron. The metals can make different colors depending on their valence.

Despite its name, moss agate does not contain organic matter
Organic matter
Organic matter is matter that has come from a once-living organism; is capable of decay, or the product of decay; or is composed of organic compounds...
and is usually formed from weathered
Weathering
Weathering is the breaking down of rocks, soils and minerals as well as artificial materials through contact with the Earth's atmosphere, biota and waters...
volcanic rock
Volcanic rock
Volcanic rock is a rock formed from magma erupted from a volcano. In other words, it is an igneous rock of volcanic origin...
s.

Montana moss agate is an agate found in the alluvial gravels of the Yellowstone River
Yellowstone River
The Yellowstone River is a tributary of the Missouri River, approximately long, in the western United States. Considered the principal tributary of the upper Missouri, the river and its tributaries drain a wide area stretching from the Rocky Mountains in the vicinity of the Yellowstone National...
and its tributaries between Sidney
Sidney, Montana
Sidney is a city in and the county seat of Richland County, Montana, United States, less than away from the North Dakota border. The population was 5,191 at the 2010 census. The city lies along the Yellowstone River and is in proximity to the badlands of the Dakotas...
and Billings, Montana
Billings, Montana
Billings is the largest city in the U.S. state of Montana, and is the principal city of the Billings Metropolitan Area, the largest metropolitan area in over...
. The agate originally was formed in the Yellowstone National Park
Yellowstone National Park
Yellowstone National Park, established by the U.S. Congress and signed into law by President Ulysses S. Grant on March 1, 1872, is a national park located primarily in the U.S. state of Wyoming, although it also extends into Montana and Idaho...
area of Wyoming as a result of volcanic activity. In Montana moss agate the red color is the result of iron oxide and the black color is the result of manganese oxide.