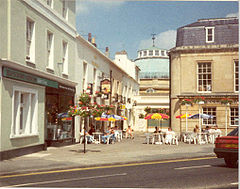 Montpellier is a district of Cheltenham
Cheltenham
Cheltenham , also known as Cheltenham Spa, is a large spa town and borough in Gloucestershire, on the edge of the Cotswolds in the South-West region of England. It is the home of the flagship race of British steeplechase horse racing, the Gold Cup, the main event of the Cheltenham Festival held...
, Gloucestershire
Gloucestershire
Gloucestershire is a county in South West England. The county comprises part of the Cotswold Hills, part of the flat fertile valley of the River Severn, and the entire Forest of Dean....
(England
England
England is a country that is part of the United Kingdom. It shares land borders with Scotland to the north and Wales to the west; the Irish Sea is to the north west, the Celtic Sea to the south west, with the North Sea to the east and the English Channel to the south separating it from continental...
), at the end of the Promenade south of the town centre. Originally developed in the 1830s in conjunction with the spa
Spa
The term spa is associated with water treatment which is also known as balneotherapy. Spa towns or spa resorts typically offer various health treatments. The belief in the curative powers of mineral waters goes back to prehistoric times. Such practices have been popular worldwide, but are...
s, it is now known for its bars, cafés, restaurants and range of specialist shops. In April 2008 Montpellier was one of the most expensive areas in Cheltenham to buy property, with apartments ranging from £300,000 to over £1,000,000, townhouses from around £400,000, and houses over £4,000,000.

Montpellier Spa was initiated by Henry Thompson after springs were discovered on land he bought in 1801. The Spa buildings of 1817 were by George Allen Underwood
George Allen Underwood
George Allen Underwood was an architect in Cheltenham.He was a pupil of Sir John Soane from 1807 to 1815 and then started his own practice in Cheltenham...
. Thompson's son Pearson
Pearson Thompson
Pearson Thompson was an English solicitor and property developer who was responsible for the layout of a great part of Cheltenham, and of the Ladbroke Estate in London. He subsequently emigrated to Australia where he practiced law.Thompson was the son of Henry Thompson and Judith, née Teshmaker...
extensively developed the area and arranged for supporting entertainment for the spa facilities. He commissioned the distinctive Rotunda
Rotunda (architecture)
A rotunda is any building with a circular ground plan, sometimes covered by a dome. It can also refer to a round room within a building . The Pantheon in Rome is a famous rotunda. A Band Rotunda is a circular bandstand, usually with a dome...
by John Buonarotti Papworth
John Buonarotti Papworth
John Buonarotti Papworth was a prolific architect, artist and a founder member of the Royal Institute of British Architects....
as a pump room in 1825. This is now a branch of Lloyds TSB
Lloyds TSB
Lloyds TSB Bank Plc is a retail bank in the United Kingdom. It was established in 1995 by the merger of Lloyds Bank, established in Birmingham, England in 1765 and traditionally considered one of the Big Four clearing banks, with the TSB Group which traces its origins to 1810...
bank. Opposite are Montpellier Gardens, also laid out by Papworth. The architects and developers R. W. and C. Jearrad took over the running of Montpellier Spa from Thompson in 1830. Montpellier Walk, leading to Montpellier Spa and designed by W. H. Knight in 1840, is noted for the caryatids supporting the shop fronts.

Montpellier's bars include The Montpellier Wine Bar http://www.montpellierwinebar.com/, The Rotunda Tavern, The Salisbury, O'Neill's and Ha-Ha Bar, with The Circus Bar at the lower end of Montpellier Street. Eating establishments include The Thai Brasserie (Thai), Armagnac (French), Indian Voojan (Indian), and Strada (Italian and Mediterranean).
The source of this article is wikipedia, the free encyclopedia.  The text of this article is licensed under the GFDL.