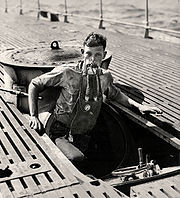 The Momsen lung was a primitive underwater rebreather
Rebreather
A rebreather is a type of breathing set that provides a breathing gas containing oxygen and recycled exhaled gas. This recycling reduces the volume of breathing gas used, making a rebreather lighter and more compact than an open-circuit breathing set for the same duration in environments where...
used before and during World War II
World War II
World War II, or the Second World War , was a global conflict lasting from 1939 to 1945, involving most of the world's nations—including all of the great powers—eventually forming two opposing military alliances: the Allies and the Axis...
by American submariners as emergency escape gear. The Momsen lung was invented by Charles B. Momsen
Charles Momsen
Charles Bowers Momsen , nicknamed "Swede", was born in Flushing, New York. He was an American pioneer in submarine rescue for the United States Navy, and he invented the underwater escape device later called the "Momsen lung", for which he received the Distinguished Service Medal in 1929...
(nicknamed "Swede"). Submariners would train in a 100-foot (30-meter) deep escape training tower
Submarine Escape Training Tower
A Submarine Escape Training Tower is part of a facility used for training submariners in methods of emergency escape from a disabled submarine. It is a tall cylinder filled with water with several entrances at varying depths each simulating an airlock in a submarine...
using this apparatus. It was first introduced as standard equipment on P-
United States Porpoise class submarine
The Porpoise class were submarines built for the United States Navy in the late 1930s, and incorporated a number of modern features that would make them the basis for subsequent classes such as the Salmon, Tambor, Gato, Balao, and Tench classes...
(Porpoise-) and Salmon
Salmon class submarine
The United States Navy Salmon-class submarines were an important developmental step in the design of the "Fleet Submarine" concept during the 1930's...
-class boats.

The device recycled the breathing gas
Breathing gas
Breathing gas is a mixture of gaseous chemical elements and compounds used for respiration.Air is the most common and only natural breathing gas...
by using a counterlung containing soda lime
Soda lime
Soda lime is a mixture of chemicals, used in granular form in closed breathing environments, such as general anaesthesia, submarines, rebreathers and recompression chambers, to remove carbon dioxide from breathing gases to prevent CO2 retention and carbon dioxide poisoning.It is made by treating...
to scrub carbon dioxide
Carbon dioxide
Carbon dioxide is a naturally occurring chemical compound composed of two oxygen atoms covalently bonded to a single carbon atom...
. The lung was initially filled with oxygen
Oxygen
Oxygen is the element with atomic number 8 and represented by the symbol O. Its name derives from the Greek roots ὀξύς and -γενής , because at the time of naming, it was mistakenly thought that all acids required oxygen in their composition...
and connected to a mouthpiece via twin hoses containing one-way valves: one for breathing in and the other for breathing out.

Only one emergency use of Momsen lungs is known: the escape from Tang
USS Tang (SS-306)
USS Tang was a Balao-class submarine of World War II. She was built and launched in 1943.In her short career, the Tang sank 33 ships displacing 116,454 tons Her commanding officer received the Medal of Honor for her last two engagements...
, 26 October 1944. Thirteen men left the escape trunk; five were picked up by the Japanese; three more reached the surface "but were unable to hang on or breathe and floated off and drowned"; the fate of the other five is unknown. Not all the escapees from the trunk used the Momsen lung. An officer had his mouthpiece knocked out shortly after leaving the submarine.. One of the trunk ascents was made without a Momsen lung. Many were unable to leave the trunk or discouraged from attempting an escape. Most of the crew perished.

The Royal Navy
Royal Navy
The Royal Navy is the naval warfare service branch of the British Armed Forces. Founded in the 16th century, it is the oldest service branch and is known as the Senior Service...
used a similar device, the Davis Submerged Escape Apparatus
Davis Submerged Escape Apparatus
The Davis Submerged Escape Apparatus , was an early type of oxygen rebreather invented in 1910 by Sir Robert Davis, head of Siebe Gorman and Co. Ltd., inspired by the earlier Fleuss system...
, but it was clumsy to use. The Royal Navy later adopted the practice of blow and go, in which the sailor would exhale continuously during ascent to avoid air expanding in the lungs, which could cause them to rupture. Postwar, submariner Walter F. Schlech, Jr., among others, examined submerged escape without breathing devices and discovered ascent was possible from as deep as 300 ft (91.4 m): "in one sense, the Momsen Lung concept may have killed far more submariners than it rescued".