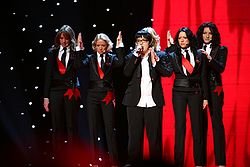 Molitva was the first song containing no English language
English language
English is a West Germanic language that arose in the Anglo-Saxon kingdoms of England and spread into what was to become south-east Scotland under the influence of the Anglian medieval kingdom of Northumbria...
lyrics to win since 1998
Eurovision Song Contest 1998
The Eurovision Song Contest 1998 was the 43rd Eurovision Song Contest and was held on 9 May 1998 at the National Indoor Arena in Birmingham, United Kingdom. The presenters were Terry Wogan and Ulrika Jonsson...
; the 2004 winner "Wild Dances
Wild Dances (song)
"Wild Dances" is the name of the song by Ukrainian pop-star Ruslana Lyzhichko . "Wild Dances" was the winning song in the Eurovision Song Contest 2004 in Turkey....
" by Ruslana
Ruslana
Ruslana Stepanivna Lyzhychko is a World Music Award winning and MTV Europe Music Award nominated artist, and the winner of the Eurovision Song Contest 2004....
had been sung mostly in Ukrainian but contained some English phrases. It was also the first time a ballad
Ballad
A ballad is a form of verse, often a narrative set to music. Ballads were particularly characteristic of British and Irish popular poetry and song from the later medieval period until the 19th century and used extensively across Europe and later the Americas, Australia and North Africa. Many...
has won since televoting
Televoting
Televoting, telephone voting or phone voting is a method of decision making and opinion polling conducted by telephone. Televoting can also extend to voting by SMS text message via a mobile cell phone.- Broadcast contest televoting :...
became the standard. The song is also notable for its stage presentation because it lacked dance routines, revealing or showy costumes, pyrotechnics
Pyrotechnics
Pyrotechnics is the science of using materials capable of undergoing self-contained and self-sustained exothermic chemical reactions for the production of heat, light, gas, smoke and/or sound...
and other gimmicks. The Eurovision Song Contest is often accused of concentrating on these things instead of the music itself. Many elements of "Molitva" contrasted with the previous winner, "Hard Rock Hallelujah
Hard Rock Hallelujah
"Hard Rock Hallelujah" is a song by the Finnish heavy metal band Lordi, which won the 2006 Eurovision Song Contest with 292 points. It was also Finland's first placement in the top five. It was voted as the most popular Finnish Eurovision entry in the forty years the country has participated...
".

Marija's performance was complemented by the notable presence of the five backing singers, who joined together afterwards to form Beauty Queens
Beauty Queens
Beauty Queens are a Serbian girlband, formed in Helsinki, Finland, in May 2007, after Marija Šerifović's victory in the Eurovision Song Contest 2007. The girls sang the backing vocals, and became very popular. They also reached third place at Beovizija 2008....
.

The English
English language
English is a West Germanic language that arose in the Anglo-Saxon kingdoms of England and spread into what was to become south-east Scotland under the influence of the Anglian medieval kingdom of Northumbria...
version is titled "Destiny", the Russian
Russian language
Russian is a Slavic language used primarily in Russia, Belarus, Uzbekistan, Kazakhstan, Tajikistan and Kyrgyzstan. It is an unofficial but widely spoken language in Ukraine, Moldova, Latvia, Turkmenistan and Estonia and, to a lesser extent, the other countries that were once constituent republics...
version is titled "" (Molitva). The Finnish
Finnish language
Finnish is the language spoken by the majority of the population in Finland Primarily for use by restaurant menus and by ethnic Finns outside Finland. It is one of the two official languages of Finland and an official minority language in Sweden. In Sweden, both standard Finnish and Meänkieli, a...
version is called "" and was performed by the Beauty Queens
Beauty Queens
Beauty Queens are a Serbian girlband, formed in Helsinki, Finland, in May 2007, after Marija Šerifović's victory in the Eurovision Song Contest 2007. The girls sang the backing vocals, and became very popular. They also reached third place at Beovizija 2008....
, not Marija. The song has also been released as a dance remix and a remix named "Jovan Radomir mix" by Swedish
Sweden
Sweden , officially the Kingdom of Sweden , is a Nordic country on the Scandinavian Peninsula in Northern Europe. Sweden borders with Norway and Finland and is connected to Denmark by a bridge-tunnel across the Öresund....
TV-presenter Jovan Radomir, who also wrote the English lyrics. An instrumental version has also been released as well as a karaoke version. The UK oompah band Oompah Brass http://www.oompahbrass.com recorded an instrumental version of "Molitva" on their album Oompocalypse Now (2008) http://www.oompahbrass.com/Oompah_Brass/CD.html, premiered at the 2007 Belgrade Beer Festival.


Use of the song

Molitva has been often played for many successes Serbia
Serbia
Serbia , officially the Republic of Serbia , is a landlocked country located at the crossroads of Central and Southeast Europe, covering the southern part of the Carpathian basin and the central part of the Balkans...
has had in the year 2007. It was played at a welcome party for Serbia's tennis players after their French Open successes .

During Wimbledon 2007, Molitva was often used during clips displaying the courts and players on the BBC. It was mainly used before and after footage or interviews with the Serbian players.