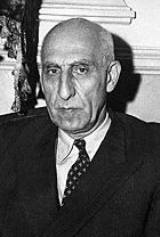 Overview
Mohammad Mosaddegh or Mosaddeq mosædˈdeɣ*), also Mossadegh, Mossadeq, Mosadeck, or Musaddiq (16 June 1882 – 5 March 1967), was the democratically elected Prime Minister of Iran
Prime Minister of Iran
Prime Minister of Iran was a political post in Iran that had existed during several different periods of time starting with the Qajar era until its most recent revival from 1979 to 1989 following the Iranian Revolution.-Prime Ministers of Qajar era:In the Qajar era, prime ministers were known by...
from 1951 to 1953 when he was overthrown in a coup d'état orchestrated by the British
United Kingdom
The United Kingdom of Great Britain and Northern IrelandIn the United Kingdom and Dependencies, other languages have been officially recognised as legitimate autochthonous languages under the European Charter for Regional or Minority Languages...
MI5
MI5
The Security Service, commonly known as MI5 , is the United Kingdom's internal counter-intelligence and security agency and is part of its core intelligence machinery alongside the Secret Intelligence Service focused on foreign threats, Government Communications Headquarters and the Defence...
and the United States
United States
The United States of America is a federal constitutional republic comprising fifty states and a federal district...
Central Intelligence Agency
Central Intelligence Agency
The Central Intelligence Agency is a civilian intelligence agency of the United States government. It is an executive agency and reports directly to the Director of National Intelligence, responsible for providing national security intelligence assessment to senior United States policymakers...
.

From an aristocratic background, Mosaddegh was an author, administrator, lawyer, prominent parliamentarian, and politician.