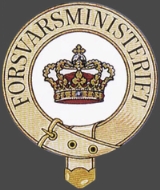 The Ministry of Defence was established following the Danish defence law of May 27, 1950 (law #272), about the central structure of the military of Denmark
Military of Denmark
The armed forces of the Kingdom of Denmark, known as the Danish Defence is charged with the defence of the Kingdom of Denmark.The Chief of Defence is the head of the Danish Armed Forces, and is head of the Defence Command which is managed by the Ministry of Defence. Constitutionally, the...
. This combined the two previous ministries; Ministry of War (Krigsministeriet) and the Marine ministry (Marineministeriet). The Minister of Defence had already been created in 1905 as the head of both ministries, though still with branch (Army and Navy) chiefs as administrators.

This new Ministry can though trace its history back to 1660, when King Frederick III
Frederick III of Denmark
Frederick III was king of Denmark and Norway from 1648 until his death. He instituted absolute monarchy in Denmark and Norway in 1660, confirmed by law in 1665 as the first in western historiography. He was born the second-eldest son of Christian IV of Denmark and Anne Catherine of Brandenburg...
established a War collegium (Krigskollegium) for the Army to in both war- and peacetime to administer the Army. A similar command had previously been created for the Navy, the Admiralty (Admiralitetet) of 1655.


Departments and areas of responsibility