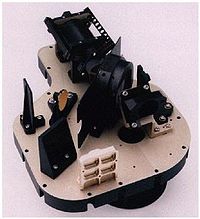 The Mini-TES was originally developed by Raytheon
Raytheon
Raytheon Company is a major American defense contractor and industrial corporation with core manufacturing concentrations in weapons and military and commercial electronics. It was previously involved in corporate and special-mission aircraft until early 2007...
for the Department of Geological Sciences at Arizona State University
Arizona State University
Arizona State University is a public research university located in the Phoenix Metropolitan Area of the State of Arizona...
. The Mini-TES is a miniaturized version of Raytheon’s Mars Global Surveyor
Mars Global Surveyor
The Mars Global Surveyor was a US spacecraft developed by NASA's Jet Propulsion Laboratory and launched November 1996. It began the United States's return to Mars after a 10-year absence. It completed its primary mission in January 2001 and was in its third extended mission phase when, on 2...
(MGS) TES, built by Arizona State University and Raytheon SAS’ Santa Barbara Remote Sensing. The MGS TES data helped scientists choose landing sites for the Spirit and Opportunity Mars explorer rovers.

The Mini-TES is used for identifying promising rocks and soils for closer examination, and to determine the processes that formed Martian rocks. It measures the infrared radiation that the target rock or object emits in 167 different wavelengths, providing information about the target's composition. One particular goal is to search for minerals that were formed by the action of water, such as carbonates and clays. The instrument can also look skyward to provide temperature profiles of the Martian atmosphere and detect the abundance of dust and water vapor. The actual instrument is located inside the warm electronics box in the body of the rover - the mirror redirects radiation into the aperture from above. The Mini-TES instruments aboard the MERs Opportunity and Spirit were never expected to survive the cold Martian winter even if the rovers themselves survived. It was thought that a small potassium bromide
Potassium bromide
Potassium bromide is a salt, widely used as an anticonvulsant and a sedative in the late 19th and early 20th centuries, with over-the-counter use extending to 1975 in the United States. Its action is due to the bromide ion...
(KBr) beamsplitter which was housed in an aluminium fitting would crack due to the mismatched coefficient of thermal expansion. This never happened however and the miniTES instrument on both rovers has survived several Martian winters, and the Spirit rover continues to periodically use the Mini-TES for remote sensing. (The miniTES on the Opportunity rover is not currently being used because of accumulated dust on the mirror following the 2007 dust storm).

There are two other types of spectrometers mounted on the rover
Mars Exploration Rover
NASA's Mars Exploration Rover Mission is an ongoing robotic space mission involving two rovers, Spirit and Opportunity, exploring the planet Mars...
's arm which provide additional information about the composition when the rover is close enough to touch the object.