Encyclopedia
Mineral is a town in Louisa County
Louisa County, Virginia
Louisa County is a county located in the Commonwealth of Virginia. As of 2010, the population was 33,153. The county seat is Louisa.- History :...
, Virginia
Virginia
The Commonwealth of Virginia , is a U.S. state on the Atlantic Coast of the Southern United States. Virginia is nicknamed the "Old Dominion" and sometimes the "Mother of Presidents" after the eight U.S. presidents born there...
, United States
United States
The United States of America is a federal constitutional republic comprising fifty states and a federal district...
. The population was 424 at the 2000 census.

Mineral was originally known as Tolersville, but adopted its current name when it incorporated in 1902 due to the mining industry that supported the community. It was the center of gold mining activity in Louisa County, and during its heyday, there were fifteen gold mines located within two miles (3 km) of the town. A zinc and lead mine also operated in the area into the 1970s.

As of the census
Census
A census is the procedure of systematically acquiring and recording information about the members of a given population. It is a regularly occurring and official count of a particular population. The term is used mostly in connection with national population and housing censuses; other common...
of 2000, there were 424 people, 172 households, and 115 families residing in the town. The population density
Population density
Population density is a measurement of population per unit area or unit volume. It is frequently applied to living organisms, and particularly to humans...
was 474.7 per square mile (183.9/km²). There were 196 housing units at an average density of 219.5/sq mi (85.0/km²). The racial makeup of the town was 82.8% White, 9.9% Black, and 7.3% from two or more races. 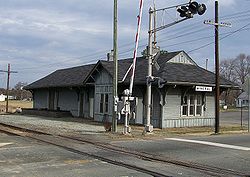 There were 172 households out of which 30.2% had children under the age of 18 living with them, 53.5% were married couples
Marriage
Marriage is a social union or legal contract between people that creates kinship. It is an institution in which interpersonal relationships, usually intimate and sexual, are acknowledged in a variety of ways, depending on the culture or subculture in which it is found...
living together, 9.9% had a female householder with no husband present, and 32.6% were non-families. 30.2% of all households were made up of individuals and 15.1% had someone living alone who was 65 years of age or older. The average household size was 2.47 and the average family size was 3.09.

The median income for a household in the town was $37,500, and the median income for a family was $49,000. Males had a median income of $34,375 versus $24,063 for females. The per capita income
Per capita income
Per capita income or income per person is a measure of mean income within an economic aggregate, such as a country or city. It is calculated by taking a measure of all sources of income in the aggregate and dividing it by the total population...
for the town was $19,397. About 4.5% of families and 6.4% of the population were below the poverty line, including 5.2% of those under age 18 and 3.9% of those age 65 or over.

At 1:51 p.m. on August 23, 2011, a 5.8 magnitude earthquake was centered 5 miles (8 kilometers) south-southwest of Mineral, at a depth of 3.7 miles (6 kilometers). According to Associated Press, it "forced evacuations of all the monuments on the National Mall in Washington and rattled nerves from Florida to Canada". The roof of Mineral's town hall collapsed, and three of the six schools in the county's school system suffered heavy damage. There were no fatalities, and only minor injuries.
The source of this article is wikipedia, the free encyclopedia.  The text of this article is licensed under the GFDL.