Encyclopedia
The Milwaukee Mustangs are a professional arena football
Arena football
Arena football is a variety of gridiron football played by the Arena Football League . It is a proprietary game, the rights to which are owned by Gridiron Enterprises, and is played indoors on a smaller field than American or Canadian outdoor football, resulting in a faster and higher-scoring game....
team based in Milwaukee, Wisconsin
Milwaukee, Wisconsin
Milwaukee is the largest city in the U.S. state of Wisconsin, the 28th most populous city in the United States and 39th most populous region in the United States. It is the county seat of Milwaukee County and is located on the southwestern shore of Lake Michigan. According to 2010 census data, the...
. They are currently members of the Arena Football League
Arena Football League
The Arena Football League is the highest level of professional indoor American football in the United States. It is currently the second longest running professional football league in the United States, after the National Football League. It was founded in 1987 by Jim Foster...
(AFL), which they joined in 2010 during the league's restructuring. They play their home games at the Bradley Center
Bradley Center
The Bradley Center is an indoor arena, located on the northwest corner of North 4th and West State Streets, in Downtown Milwaukee, Wisconsin....
in downtown Milwaukee.

The team began play in 2009 as the Milwaukee Iron, and competed in af2
Af2
AF2 was the name of the Arena Football League's developmental league; it was founded in 1999 and played its first season in 2000. Like parent AFL, the AF2 played using the same arena football rules and style of play. League seasons ran from April through July with the postseason and ArenaCup...
, the AFL's developmental league. They joined the AFL after the league's restructuring in 2010. On January 27, 2011, the team officially changed its name to the Mustangs, after an older team that had played in the AFL from 1994–2001. Their current head coach is Bob Landsee
Bob Landsee
Robert John "Bob" Landsee is the head coach and owner of the Milwaukee Mustangs of the Arena Football League. He is a former American football center and guard who played for two seasons in the National Football League. He played for the Philadelphia Eagles from 1986–1987...
.

The Milwaukee Iron were announced as an af2 expansion team in March 2008 when the team's ownership group announced a three-year lease agreement to play at the Bradley Center beginning with the 2009 season. The announcement came the day before the Milwaukee Bonecrushers kicked off play in the Continental Indoor Football League at Milwaukee's US Cellular Arena.

Milwaukee had been without an arena football team since the Milwaukee Mustangs of the Arena Football League folded in 2001 after not being allowed to play at the Bradley Center.

The Iron played its first game on Thursday, March 12, 2009, a 60-0 exhibition shutout of the New Zealand Overstayers at the Bradley Center. They opened the regular season on Friday, March 27, 2009 when they played host to the Iowa Barnstormers
Iowa Barnstormers
The Iowa Barnstormers are an arena football team based in Des Moines, Iowa. They are currently members of the Arena Football League , which they joined in 2010 following the organization's restructuring...
. The Iron lost 60-38.

The Iron entered the Arena Football League in 2010. The team finished the year 11-5 and won the Midwest Division.

The team changed its name to the Mustangs on January 27, 2011. The name "Mustangs" was chosen as it was the name of the original franchise that existed from 1994 to 2001. 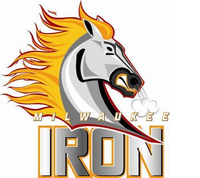