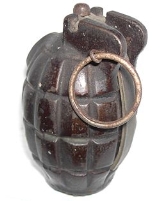 Encyclopedia
Mills bomb is the popular name for a series of prominent British
United Kingdom
The United Kingdom of Great Britain and Northern IrelandIn the United Kingdom and Dependencies, other languages have been officially recognised as legitimate autochthonous languages under the European Charter for Regional or Minority Languages...
hand grenade
Hand grenade
A hand grenade is any small bomb that can be thrown by hand. Hand grenades are classified into three categories, explosive grenades, chemical and gas grenades. Explosive grenades are the most commonly used in modern warfare, and are designed to detonate after impact or after a set amount of time...
s. They were the first modern fragmentation grenades in the world.

William Mills
William Mills (inventor of the Mills bomb)
Sir William Mills of Sunderland was the inventor of the Mills bomb which was developed and manufactured at his factory in Birmingham, England....
, a hand grenade
Hand grenade
A hand grenade is any small bomb that can be thrown by hand. Hand grenades are classified into three categories, explosive grenades, chemical and gas grenades. Explosive grenades are the most commonly used in modern warfare, and are designed to detonate after impact or after a set amount of time...
designer from Sunderland, patented, developed and manufactured the "Mills bomb" at the Mills Munition Factory in Birmingham
Birmingham
Birmingham is a city and metropolitan borough in the West Midlands of England. It is the most populous British city outside the capital London, with a population of 1,036,900 , and lies at the heart of the West Midlands conurbation, the second most populous urban area in the United Kingdom with a...
, England, in 1915.
The Mills bomb was adopted by the British Army
British Army
The British Army is the land warfare branch of Her Majesty's Armed Forces in the United Kingdom. It came into being with the unification of the Kingdom of England and Scotland into the Kingdom of Great Britain in 1707. The new British Army incorporated Regiments that had already existed in England...
as its standard hand grenade in 1915, and designated as the No. 5. It was also used by the Irish Republican Army
Irish Republican Army (1922–1969)
The original Irish Republican Army fought a guerrilla war against British rule in Ireland in the Irish War of Independence 1919–1921. Following the signing of the Anglo-Irish Treaty on 6 December 1921, the IRA in the 26 counties that were to become the Irish Free State split between supporters and...
.

The Mills bomb underwent numerous modifications. The No. 23 was a variant of the No. 5 with a rodded base plug which allowed it to be fired from a rifle. This concept evolved further with the No. 36, a variant with a detachable base plate to allow use with a rifle discharger cup. The final variation of the Mills bomb, the No. 36M, was specially designed and waterproofed with shellac
Shellac
Shellac is a resin secreted by the female lac bug, on trees in the forests of India and Thailand. It is processed and sold as dry flakes , which are dissolved in ethyl alcohol to make liquid shellac, which is used as a brush-on colorant, food glaze and wood finish...
for use initially in the hot climate of Mesopotamia
Mesopotamia
Mesopotamia is a toponym for the area of the Tigris–Euphrates river system, largely corresponding to modern-day Iraq, northeastern Syria, southeastern Turkey and southwestern Iran.Widely considered to be the cradle of civilization, Bronze Age Mesopotamia included Sumer and the...
in 1917, but remained in production for many years. By 1918 the No. 5 and No. 23 were declared obsolete and the No. 36 (but not the 36M) followed in 1932.

The Mills was a classic design; a grooved cast iron
Cast iron
Cast iron is derived from pig iron, and while it usually refers to gray iron, it also identifies a large group of ferrous alloys which solidify with a eutectic. The color of a fractured surface can be used to identify an alloy. White cast iron is named after its white surface when fractured, due...
"pineapple" with a central striker held by a close hand lever and secured with a pin. Although the segmented body helps to create fragments when the grenade explodes, according to Mills' notes the casing was grooved to make it easier to grip and not as an aid to fragmentation. The Mills was a defensive grenade: after throwing the user had to take cover immediately. A competent thrower could manage 15 metres (49 feet) with reasonable accuracy, but the grenade could throw lethal fragments farther than this. It could be fitted with a flat base and fired with a blank cartridge from a rifle with a "cup" attachment, giving it a range of around 150 m.

At first the grenade was fitted with a seven-second fuse to accommodate both hand and rifle launch, but during combat in the Battle of France
Battle of France
In the Second World War, the Battle of France was the German invasion of France and the Low Countries, beginning on 10 May 1940, which ended the Phoney War. The battle consisted of two main operations. In the first, Fall Gelb , German armoured units pushed through the Ardennes, to cut off and...
in 1940 this delay proved too long—giving defenders time to escape the explosion, or even to throw the grenade back—and was reduced to four seconds.

The heavy, segmented bodies of "pineapple" type grenades result in an unpredictable pattern of fragmentation. After the Second World War Britain and the US adopted grenades that contained segmented coiled wire in smooth metal casings. The No. 36M Mk.I remained the standard grenade of the British Armed Forces
British Armed Forces
The British Armed Forces are the armed forces of the United Kingdom of Great Britain and Northern Ireland.Also known as Her Majesty's Armed Forces and sometimes legally the Armed Forces of the Crown, the British Armed Forces encompasses three professional uniformed services, the Royal Navy, the...
and was manufactured in the UK until 1972, when it was completely replaced by the L2
M61 grenade
-Description:The M26 is a fragmentation grenade developed by the United States military. Its distinct lemon shape led it to being nicknamed the "lemon grenade"....
series. The 36M remained in service in some parts of the world such as India
India
India , officially the Republic of India , is a country in South Asia. It is the seventh-largest country by geographical area, the second-most populous country with over 1.2 billion people, and the most populous democracy in the world...
and Pakistan
Pakistan
Pakistan , officially the Islamic Republic of Pakistan is a sovereign state in South Asia. It has a coastline along the Arabian Sea and the Gulf of Oman in the south and is bordered by Afghanistan and Iran in the west, India in the east and China in the far northeast. In the north, Tajikistan...
, where it was manufactured until the early 1980s. That the Mills bomb remained in use for so many years says much about its effectiveness.