Encyclopedia
Mildenhall is a village and civil parish in the Kennet Valley
River Kennet
The Kennet is a river in the south of England, and a tributary of the River Thames. The lower reaches of the river are navigable to river craft and are known as the Kennet Navigation, which, together with the Avon Navigation, the Kennet and Avon Canal and the Thames, links the cities of Bristol...
in Wiltshire
Wiltshire
Wiltshire is a ceremonial county in South West England. It is landlocked and borders the counties of Dorset, Somerset, Hampshire, Gloucestershire, Oxfordshire and Berkshire. It contains the unitary authority of Swindon and covers...
about 1 miles (1.6 km) east of the market town
Market town
Market town or market right is a legal term, originating in the medieval period, for a European settlement that has the right to host markets, distinguishing it from a village and city...
of Marlborough.

The toponym
Toponymy
Toponymy is the scientific study of place names , their origins, meanings, use and typology. The word "toponymy" is derived from the Greek words tópos and ónoma . Toponymy is itself a branch of onomastics, the study of names of all kinds...
is derived from the Old English but the site has been occupied since the Roman occupation of Britain
Roman Britain
Roman Britain was the part of the island of Great Britain controlled by the Roman Empire from AD 43 until ca. AD 410.The Romans referred to the imperial province as Britannia, which eventually comprised all of the island of Great Britain south of the fluid frontier with Caledonia...
, when the fortress town of Cunetio
Cunetio
The Roman town of Cunetio, located across the river from the modern town of Mildenhall, Wiltshire was occupied from the second century a.d. until the end of the Roman period, early fifth century, when it was apparently abandoned. It's location was identified from arial photos of crop marks taken in...
stood at an important road junction on approximately the same site. No remains of this fortress are now standing, but are clearly visible on aerial photographs. The Cunetio Hoard
Cunetio Hoard
The Cunetio Hoard is the largest hoard of Roman coins found in Britain. It was discovered in 1978 at Mildenhall, Wiltshire, and consisted of 54,951 low value coins. The coins were contained in a large pot and a container which had been constructed from lead...
of Roman coins was discovered here in 1978. The name of the River Kennet
River Kennet
The Kennet is a river in the south of England, and a tributary of the River Thames. The lower reaches of the river are navigable to river craft and are known as the Kennet Navigation, which, together with the Avon Navigation, the Kennet and Avon Canal and the Thames, links the cities of Bristol...
, which runs through Mildenhall, is thought to have been derived from the Roman name, which is also used on the village's coat-of-arms.

Cunetio was deserted as a Romano-British site in about AD 450, but the site was reoccupied in the Anglo-Saxon era and a West Saxon charter drawn up between 803 and 805 refers to this settlement in its first recognisably modern form as Mildanhald, meaning "a nook of land of a woman called Milde or a man called Milda". The village is again mentioned in Domesday Book
Domesday Book
Domesday Book , now held at The National Archives, Kew, Richmond upon Thames in South West London, is the record of the great survey of much of England and parts of Wales completed in 1086...
in 1086 as Mildenhalle and the name has since undergone numerous subtle changes in spelling and pronunciation. 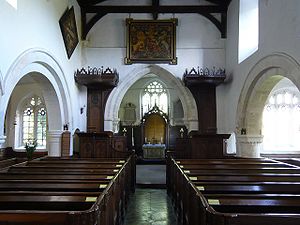 The Church of England parish church
Church of England parish church
A parish church in the Church of England is the church which acts as the religious centre for the people within the smallest and most basic Church of England administrative region, known as a parish.-Parishes in England:...
of Saint John the Baptist
John the Baptist
John the Baptist was an itinerant preacher and a major religious figure mentioned in the Canonical gospels. He is described in the Gospel of Luke as a relative of Jesus, who led a movement of baptism at the Jordan River...
originates from before the Norman Conquest
Norman conquest of England
The Norman conquest of England began on 28 September 1066 with the invasion of England by William, Duke of Normandy. William became known as William the Conqueror after his victory at the Battle of Hastings on 14 October 1066, defeating King Harold II of England...
: some parts of the tower are undoubtedly Saxon
Anglo-Saxon architecture
Anglo-Saxon architecture was a period in the history of architecture in England, and parts of Wales, from the mid-5th century until the Norman Conquest of 1066. Anglo-Saxon secular buildings in Britain were generally simple, constructed mainly using timber with thatch for roofing...
in date. However, much of the present building dates from the thirteenth century. In 1816 the interior was refurbished by the villagers. Of particular note are the box pew
Box pew
Box pew is a type of church pew that is encased in panelling and was prevalent in England and other Protestant countries from the 16th to early 19th century.-History in England:...
s and the twin pulpit
Pulpit
Pulpit is a speakers' stand in a church. In many Christian churches, there are two speakers' stands at the front of the church. Typically, the one on the left is called the pulpit...
and reading desk.

Sir John Betjeman
John Betjeman
Sir John Betjeman, CBE was an English poet, writer and broadcaster who described himself in Who's Who as a "poet and hack".He was a founding member of the Victorian Society and a passionate defender of Victorian architecture...
refers to St. John's as "a church of a Jane Austen
Jane Austen
Jane Austen was an English novelist whose works of romantic fiction, set among the landed gentry, earned her a place as one of the most widely read writers in English literature, her realism and biting social commentary cementing her historical importance among scholars and critics.Austen lived...
novel". Simon Jenkins
Simon Jenkins
Sir Simon David Jenkins is a British newspaper columnist and author, and since November 2008 has been chairman of the National Trust. He currently writes columns for both The Guardian and London's Evening Standard, and was previously a commentator for The Times, which he edited from 1990 to 1992...
includes it in his England's Thousand Best Churches.

St. John's parish is now a member of the Marlborough team ministry.

The village has a public house
Public house
A public house, informally known as a pub, is a drinking establishment fundamental to the culture of Britain, Ireland, Australia and New Zealand. There are approximately 53,500 public houses in the United Kingdom. This number has been declining every year, so that nearly half of the smaller...
, The Horseshoe Inn. Until a few years ago Mildenhall had a post office and village shop
General store
A general store, general merchandise store, or village shop is a rural or small town store that carries a general line of merchandise. It carries a broad selection of merchandise, sometimes in a small space, where people from the town and surrounding rural areas come to purchase all their general...
. The village hall
Village hall
In the United States, a village hall is the seat of government for villages. It functions much as a city hall does within cities.In the United Kingdom, a village hall is usually a building within a village which contains at least one large room, usually owned by and run for the benefit of the local...
was built in 1988.

Mildenhall usually holds a village fete, usually in mid-September on the village playing field (weather permitting), as well as a Guy Fawkes Bonfire Night and a Duck Race (using plastic ducks). Mildenhall publishes a monthly newsletter called The Parish Pump, now a joint publication with the neighbouring village of Axford
Axford, Wiltshire
Axford is a hamlet in the Kennet Valley about east of Marlborough in the English county of Wiltshire.-History:Axford was one of seven Saxon settlements along the Kennet Valley in modern-day Wiltshire in the 5th and 6th centuries....
.