Overview
Mikhail Aleksandrovich Vrubel is usually regarded amongst the Russian painters of the Symbolist
Symbolism (arts)
Symbolism was a late nineteenth-century art movement of French, Russian and Belgian origin in poetry and other arts. In literature, the style had its beginnings with the publication Les Fleurs du mal by Charles Baudelaire...
movement. In reality, he deliberately stood aloof from contemporary art trends, so that the origin of his unusual manner should be sought in Late Byzantine and Early Renaissance painting.
Vrubel was born in Omsk
Omsk
-History:The wooden fort of Omsk was erected in 1716 to protect the expanding Russian frontier along the Ishim and the Irtysh rivers against the Kyrgyz nomads of the Steppes...
, Russia, into a military lawyer's family. His father was of Polish
Poles
thumb|right|180px|The state flag of [[Poland]] as used by Polish government and diplomatic authoritiesThe Polish people, or Poles , are a nation indigenous to Poland. They are united by the Polish language, which belongs to the historical Lechitic subgroup of West Slavic languages of Central Europe...
ancestry , while his mother who was Danish died when he was three years old.

Elevate the soul by grandiose images beyond all everyday pettiness.

Encyclopedia
Mikhail Aleksandrovich Vrubel is usually regarded amongst the Russian painters of the Symbolist
Symbolism (arts)
Symbolism was a late nineteenth-century art movement of French, Russian and Belgian origin in poetry and other arts. In literature, the style had its beginnings with the publication Les Fleurs du mal by Charles Baudelaire...
movement. In reality, he deliberately stood aloof from contemporary art trends, so that the origin of his unusual manner should be sought in Late Byzantine and Early Renaissance painting.

Vrubel was born in Omsk
Omsk
-History:The wooden fort of Omsk was erected in 1716 to protect the expanding Russian frontier along the Ishim and the Irtysh rivers against the Kyrgyz nomads of the Steppes...
, Russia, into a military lawyer's family. His father was of Polish
Poles
thumb|right|180px|The state flag of [[Poland]] as used by Polish government and diplomatic authoritiesThe Polish people, or Poles , are a nation indigenous to Poland. They are united by the Polish language, which belongs to the historical Lechitic subgroup of West Slavic languages of Central Europe...
ancestry , while his mother who was Danish died when he was three years old. And though he graduated from the Faculty of Law at St Petersburg University in 1880, his father had recognized his talent for art and had made sure to provide, through numerous tutors, what proved to be a sporadic education in the subject. The next year he entered the Imperial Academy of Arts
Imperial Academy of Arts
The Russian Academy of Arts, informally known as the St. Petersburg Academy of Arts, was founded in 1757 by Ivan Shuvalov under the name Academy of the Three Noblest Arts. Catherine the Great renamed it the Imperial Academy of Arts and commissioned a new building, completed 25 years later in 1789...
, where he studied by direction of Pavel Chistyakov
Pavel Chistyakov
Pavel Petrovich Chistiakov was a Russian painter and teacher of art.He studied at the St. Petersburg Academy of Arts under Petr Basin. He was a pensioner of the Academy of Arts in Paris and in Rome...
. Even in his earliest works, he exhibited great talent for drawing and an idiosyncratic style. He would later develop a penchant for fragmentary composition and an "unfinished touch".

In 1884, he was summoned to replace the lost 12th-century murals and mosaics in the St. Cyril's Church
St. Cyril's Monastery
St. Cyril's Monastery is a medieval monastery in Kiev, the capital of Ukraine. The monastery contains the famous St. Cyril's Church, an important specimen of Kievan Rus' architecture of the 12th century, and combining elements of the 17th and 19th centuries. However, being largely Ukrainian...
of Kiev
Kiev
Kiev or Kyiv is the capital and the largest city of Ukraine, located in the north central part of the country on the Dnieper River. The population as of the 2001 census was 2,611,300. However, higher numbers have been cited in the press....
with new ones. In order to execute this commission, he went to Venice
Venice
Venice is a city in northern Italy which is renowned for the beauty of its setting, its architecture and its artworks. It is the capital of the Veneto region...
to study medieval Christian art. It was here that, in the words of an art historian, "his palette acquired new strong saturated tones resembling the iridescent play of precious stones". Most of his works painted in Venice have been lost, because the artist was more interested in creative process than in promoting his artwork. 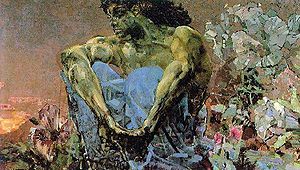 In 1886, he returned to Kiev, where he submitted some designs to the newly-built St Volodymir Cathedral. The jury, however, failed to appreciate the novelty of his works, and they were rejected. At that period, he executed some illustrations for Hamlet
Hamlet
The Tragical History of Hamlet, Prince of Denmark, or more simply Hamlet, is a tragedy by William Shakespeare, believed to have been written between 1599 and 1601...
and Anna Karenina
Anna Karenina
Anna Karenina is a novel by the Russian writer Leo Tolstoy, published in serial installments from 1873 to 1877 in the periodical The Russian Messenger...
which had little in common with his later Demon and Prophet themes.

In 1905 he created the mosaics of the hotel "Metropol" in Moscow, of which the centre piece of the facade overlooking Teatralnaya Ploschad is occupied by the mosaic panel, 'Princess Gryoza' (Princess of Dream). 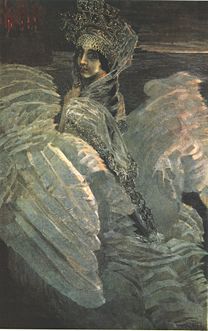 While in Kiev, Vrubel started painting sketches and watercolours illustrating the Demon, a long Romantic poem by Mikhail Lermontov
Mikhail Lermontov
Mikhail Yuryevich Lermontov , a Russian Romantic writer, poet and painter, sometimes called "the poet of the Caucasus", became the most important Russian poet after Alexander Pushkin's death in 1837. Lermontov is considered the supreme poet of Russian literature alongside Pushkin and the greatest...
. The poem described the carnal passion of "an eternal nihilistic spirit" to a Georgian girl Tamara. At that period Vrubel developed a keen interest in Oriental arts, and particularly Persian carpets, and even attempted to imitate their texture in his paintings.

In 1890, Vrubel relocated to Moscow where he could best follow the burgeoning innovations and trends in art. Like other artists associated with the Art Nouveau style, he excelled not only in painting but also in applied arts, such as ceramics
Ceramics (art)
In art history, ceramics and ceramic art mean art objects such as figures, tiles, and tableware made from clay and other raw materials by the process of pottery. Some ceramic products are regarded as fine art, while others are regarded as decorative, industrial or applied art objects, or as...
, majolics
Maiolica
Maiolica is Italian tin-glazed pottery dating from the Renaissance. It is decorated in bright colours on a white background, frequently depicting historical and legendary scenes.-Name:...
, and stained glass
Stained glass
The term stained glass can refer to coloured glass as a material or to works produced from it. Throughout its thousand-year history, the term has been applied almost exclusively to the windows of churches and other significant buildings...
. He also produced architectural masks, stage sets, and costume
Costume
The term costume can refer to wardrobe and dress in general, or to the distinctive style of dress of a particular people, class, or period. Costume may also refer to the artistic arrangement of accessories in a picture, statue, poem, or play, appropriate to the time, place, or other circumstances...
s.

It is the large painting of Seated Demon
Demon
call - 1347 531 7769 for more infoIn Ancient Near Eastern religions as well as in the Abrahamic traditions, including ancient and medieval Christian demonology, a demon is considered an "unclean spirit" which may cause demonic possession, to be addressed with an act of exorcism...
(1890) that brought notoriety to Vrubel. Most conservative critics accused him of "wild ugliness", whereas the art patron Savva Mamontov
Savva Mamontov
Savva Ivanovich Mamontov was a famous Russian industrialist, merchant, entrepreneur, and patron of the arts.-Biography:He was a son of the wealthy merchant and industrialist Ivan Feodorovich Mamontov and Maria Tikhonovna . In 1841 the family moved to Moscow. From 1852 he studied in St...
praised the Demon series as "fascinating symphonies of a genius" and commissioned Vrubel to paint decorations for his private opera and mansions of his friends. Unfortunately the Demon, like other Vrubel's works, doesn't look as it did when it was painted, as the artist added bronze
Bronze
Bronze is a metal alloy consisting primarily of copper, usually with tin as the main additive. It is hard and brittle, and it was particularly significant in antiquity, so much so that the Bronze Age was named after the metal...
powder to his oils in order to achieve particularly luminous, glistening effects.

During 1896, he met the famous opera
Opera
Opera is an art form in which singers and musicians perform a dramatic work combining text and musical score, usually in a theatrical setting. Opera incorporates many of the elements of spoken theatre, such as acting, scenery, and costumes and sometimes includes dance...
singer Nadezhda Zabela
Nadezhda Zabela-Vrubel
Nadezhda Ivanovna Zabela-Vrubel was a Russian opera singer. Vocally, she is best described as a lyrical soprano, with a particularly high tessitura....
. Half a year later they married and settled in Moscow, where Zabela was invited by Mamontov to perform in his private opera theatre. While in Moscow, Vrubel designed stage sets and costumes for his wife, who sang the parts of the Snow Maiden, the Swan Princess, and Princess Volkhova in Rimsky-Korsakov
Nikolai Rimsky-Korsakov
Nikolai Andreyevich Rimsky-Korsakov was a Russian composer, and a member of the group of composers known as The Five.The Five, also known as The Mighty Handful or The Mighty Coterie, refers to a circle of composers who met in Saint Petersburg, Russia, in the years 1856–1870: Mily Balakirev , César...
's operas. Using Russian fairy tales, he executed some of his most acclaimed pieces, including Pan
Pan (mythology)
Pan , in Greek religion and mythology, is the god of the wild, shepherds and flocks, nature, of mountain wilds, hunting and rustic music, as well as the companion of the nymphs. His name originates within the Greek language, from the word paein , meaning "to pasture." He has the hindquarters, legs,...
(1899), The Swan Princess (1900), and Lilacs (1900).

In 1901, Vrubel returned to the demonic themes in the large canvas Demon Downcast. In order to astound the public with a spiritual message, he repeatedly repainted the demon's ominous face, even after the painting had been exhibited to the overwhelmed audience. At the end he had a severe nervous breakdown
Nervous breakdown
Mental breakdown is a non-medical term used to describe an acute, time-limited phase of a specific disorder that presents primarily with features of depression or anxiety.-Definition:...
and was hospitalized in a mental clinic. Vrubel's mental illness was initiated or complicated by tertiary syphilis
Syphilis
Syphilis is a sexually transmitted infection caused by the spirochete bacterium Treponema pallidum subspecies pallidum. The primary route of transmission is through sexual contact; however, it may also be transmitted from mother to fetus during pregnancy or at birth, resulting in congenital syphilis...
. While there, he painted a mystical Pearl Oyster (1904) and variations on the themes of Alexander Pushkin's poem The Prophet. In 1906, overpowered by mental disease and approaching blindness
Blindness
Blindness is the condition of lacking visual perception due to physiological or neurological factors.Various scales have been developed to describe the extent of vision loss and define blindness...
, he ceased painting. Vrubel died on April 14, 1910.