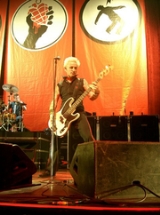 Overview
Michael Ryan Pritchard (born May 4, 1972) is an American musician, best known as the bassist, backing vocalist and co-founder of the American Rock
Rock music
Rock music is a genre of popular music that developed during and after the 1960s, particularly in the United Kingdom and the United States. It has its roots in 1940s and 1950s rock and roll, itself heavily influenced by rhythm and blues and country music...
band Green Day
Green Day
Green Day is an American punk rock band formed in 1987. The band consists of lead vocalist and guitarist Billie Joe Armstrong, bassist and backing vocalist Mike Dirnt, and drummer Tre Cool...
. While at school, he would play "air-bass." While pretending to pluck the strings, he made the noise, "dirnt, dirnt, dirnt". As a result, his schoolmates began to call him "Mike Dirnt".
Dirnt was born and raised in California. Mike's mother was a heroin addict.

Is Mike dating and/or married? i cant find it any where!
More
x