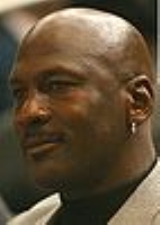 Overview
Michael Jeffrey Jordan (born February 17, 1963) is a former American professional basketball
Basketball
Basketball is a team sport in which two teams of five players try to score points by throwing or "shooting" a ball through the top of a basketball hoop while following a set of rules...
player, active entrepreneur
Entrepreneur
An entrepreneur is an owner or manager of a business enterprise who makes money through risk and initiative.The term was originally a loanword from French and was first defined by the Irish-French economist Richard Cantillon. Entrepreneur in English is a term applied to a person who is willing to...
, and majority owner of the Charlotte Bobcats
Charlotte Bobcats
The Charlotte Bobcats is a professional basketball team based in Charlotte, North Carolina. They play in the Southeast Division of the Eastern Conference of the National Basketball Association. The Bobcats were established in 2004 as an expansion team, two seasons after Charlotte's previous NBA...
. His biography on the National Basketball Association
National Basketball Association
The National Basketball Association is the pre-eminent men's professional basketball league in North America. It consists of thirty franchised member clubs, of which twenty-nine are located in the United States and one in Canada...
(NBA) website states, "By acclamation, Michael Jordan is the greatest basketball player of all time." Jordan was one of the most effectively marketed athletes of his generation and was instrumental in popularizing the NBA around the world in the 1980s and 1990s.

After a standout career at the University of North Carolina at Chapel Hill
University of North Carolina at Chapel Hill
The University of North Carolina at Chapel Hill is a public research university located in Chapel Hill, North Carolina, United States...
, where he was a member of the Tar Heels' National Championship
1982 NCAA Men's Division I Basketball Tournament
The 1982 NCAA Men's Division I Basketball Tournament involved 48 schools playing in single-elimination play to determine the national champion of men's NCAA Division I college basketball. It began on March 11, 1982, and ended with the championship game on March 29 in New Orleans, Louisiana...
team in 1982, Jordan joined the NBA's Chicago Bulls
Chicago Bulls
The Chicago Bulls are an American professional basketball team based in Chicago, Illinois, playing in the Central Division of the Eastern Conference in the National Basketball Association . The team was founded in 1966. They play their home games at the United Center...
in 1984
1984 NBA Draft
The 1984 NBA Draft was the 38th annual draft of the National Basketball Association . The draft was held at the Felt Forum at Madison Square Garden in New York City, New York on June 19, 1984 before the 1984–85 season. The draft was broadcast in the United States on the USA Network. In this draft,...
.

I have 2 Michael Jordan Hologram cards in the case 90-91 upperdeck are they worth anything?
More

What are the awards that he won repeatedly over his career?

What are the records that he set when he was playing in the NBA?

What are the nicknames that Michael Jordan has earned over the years?

What is the threepeat that Michael Jordan has to his credit?

How many times did he retire and why?
More

I've reached the pinnacle of my career. I just feel that I don't have anything else to prove.

I've missed over 9,000 shots in my career. I've lost almost 300 games. 26 times I've been trusted to take the game-winning shot and missed. I've failed over and over and over again in my life. And that is why I succeed.