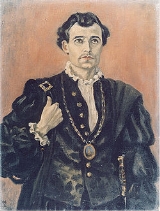 Encyclopedia
Lawrence Michael Andrew Goodliffe (1 October 1914 – 20 March 1976) was an English
England
England is a country that is part of the United Kingdom. It shares land borders with Scotland to the north and Wales to the west; the Irish Sea is to the north west, the Celtic Sea to the south west, with the North Sea to the east and the English Channel to the south separating it from continental...
actor best known for playing suave roles such as doctors, lawyers and army officers. He was also sometimes cast in working class parts.

Goodliffe was born in Bebington, Cheshire
Bebington
Bebington is a small town and electoral ward within the Metropolitan Borough of Wirral, in Merseyside, England. It lies south of Liverpool and west southwest of Manchester, along the River Mersey on the eastern side of the Wirral Peninsula...
(now Merseyside
Merseyside
Merseyside is a metropolitan county in North West England, with a population of 1,365,900. It encompasses the metropolitan area centred on both banks of the lower reaches of the Mersey Estuary, and comprises five metropolitan boroughs: Knowsley, St Helens, Sefton, Wirral, and the city of Liverpool...
), the son of a vicar, and educated at St Edmund's School
St Edmund's School
St Edmund’s School is an independent school in Canterbury, Kent, England, U.K. with over 500 pupils, including both day pupils and boarders.-History:...
, Canterbury
Canterbury
Canterbury is a historic English cathedral city, which lies at the heart of the City of Canterbury, a district of Kent in South East England. It lies on the River Stour....
, and Keble College, Oxford
Keble College, Oxford
Keble College is one of the constituent colleges of the University of Oxford in England. Its main buildings are on Parks Road, opposite the University Museum and the University Parks. The college is bordered to the north by Keble Road, to the south by Museum Road, and to the west by Blackhall...
. He started his career in repertory theatre in Liverpool
Liverpool
Liverpool is a city and metropolitan borough of Merseyside, England, along the eastern side of the Mersey Estuary. It was founded as a borough in 1207 and was granted city status in 1880...
before moving on to the Royal Shakespeare Company
Royal Shakespeare Company
The Royal Shakespeare Company is a major British theatre company, based in Stratford-upon-Avon, Warwickshire, England. The company employs 700 staff and produces around 20 productions a year from its home in Stratford-upon-Avon and plays regularly in London, Newcastle-upon-Tyne and on tour across...
in Stratford upon Avon. He joined the British Army
British Army
The British Army is the land warfare branch of Her Majesty's Armed Forces in the United Kingdom. It came into being with the unification of the Kingdom of England and Scotland into the Kingdom of Great Britain in 1707. The new British Army incorporated Regiments that had already existed in England...
at the beginning of World War II
World War II
World War II, or the Second World War , was a global conflict lasting from 1939 to 1945, involving most of the world's nations—including all of the great powers—eventually forming two opposing military alliances: the Allies and the Axis...
, and received a commission as a Second Lieutenant
Second Lieutenant
Second lieutenant is a junior commissioned officer military rank in many armed forces.- United Kingdom and Commonwealth :The rank second lieutenant was introduced throughout the British Army in 1871 to replace the rank of ensign , although it had long been used in the Royal Artillery, Royal...
in the Royal Warwickshire Regiment in February 1940. He was wounded in the leg and captured at the Battle of Dunkirk
Battle of Dunkirk
The Battle of Dunkirk was a battle in the Second World War between the Allies and Germany. A part of the Battle of France on the Western Front, the Battle of Dunkirk was the defence and evacuation of British and allied forces in Europe from 26 May–4 June 1940.After the Phoney War, the Battle of...
. Goodliffe was incorrectly listed as killed in action, and even had his obituary published in a newspaper. He was to spend the rest of the war a prisoner in Germany.

Whilst in captivity he produced and acted in (and in some cases wrote) many plays and sketches to entertain fellow prisoners. These included two productions of William Shakespeare
William Shakespeare
William Shakespeare was an English poet and playwright, widely regarded as the greatest writer in the English language and the world's pre-eminent dramatist. He is often called England's national poet and the "Bard of Avon"...
's Hamlet
Hamlet
The Tragical History of Hamlet, Prince of Denmark, or more simply Hamlet, is a tragedy by William Shakespeare, believed to have been written between 1599 and 1601...
, one in Tittmoning
Tittmoning
Tittmoning is a town in the district of Traunstein, in Bavaria, Germany. It is situated on the border with Austria, on the left bank of the river Salzach, 38 km northwest of Salzburg. Population 6,151 . Postal code 84529....
and the other in Eichstätt
Eichstätt
Eichstätt is a town in the federal state of Bavaria, Germany, and capital of the District of Eichstätt. It is located along the Altmühl River, at , and had a population of 13,078 in 2002. It is home to the Katholische Universität Eichstätt-Ingolstadt, the lone Catholic university in Germany. The...
, in which he played the title role. He also produced the first staging of Noel Coward
Noël Coward
Sir Noël Peirce Coward was an English playwright, composer, director, actor and singer, known for his wit, flamboyance, and what Time magazine called "a sense of personal style, a combination of cheek and chic, pose and poise".Born in Teddington, a suburb of London, Coward attended a dance academy...
's Post Mortem
Post Mortem (Coward play)
Post Mortem is a one-act play in eight scenes, written in 1930 by Noël Coward. He wrote it after appearing in, and being moved by, an earlier play about World War I, Journey's End...
at Eichstätt. A full photographic record of these productions exists.

After the war he resumed his professional acting career. As well as appearing in the theatre he worked in film and television. He appeared in The Wooden Horse
The Wooden Horse
The Wooden Horse is a 1950 British Second World War war film starring Leo Genn, Anthony Steel and David Tomlinson and directed by Jack Lee. It is based on the book of the same name by Eric Williams, who also wrote the screenplay....
in 1950 and in other POW films. His best known film was A Night to Remember (1958) in which he played Thomas Andrews
Thomas Andrews (shipbuilder)
Thomas Andrews, Jr. was an Irish businessman and shipbuilder; managing director and head of the draughting department for the shipbuilding company Harland and Wolff in Belfast, Ireland. Andrews was the shipbuilder in charge of the plans for the ocean liner...
, builder of the RMS Titanic. His best known television series was Sam (1973–75) in which he played an unemployed Yorkshire miner. He also appeared with John Thaw
John Thaw
John Edward Thaw, CBE was an English actor, who appeared in a range of television, stage and cinema roles, his most popular being police and legal dramas such as Redcap, The Sweeney, Inspector Morse and Kavanagh QC.-Early life:Thaw came from a working class background, having been born in Gorton,...
and James Bolam
James Bolam
James Christopher Bolam, MBE is a British actor, best known for his roles as Jack Ford in When the Boat Comes In, Trevor Chaplin in The Beiderbecke Trilogy, Terry Collier in The Likely Lads and its sequel Whatever Happened to the Likely Lads?, Roy Figgis in Only When I Laugh, Dr Arthur Gilder in...
in the 1967 television series Inheritance
Inheritance (TV series)
Inheritance was a 1967 Granada produced ITV drama based on a 1932 novel by Phyllis Bentley.The ten-part period drama revolved around the fortunes of the Oldroyds, a Yorkshire mill owning family from 1812 to 1965. The early part of the series featured the Luddite riots involving the burning of mills...
.

Suffering from depression, Goodliffe had a breakdown in 1976 during the period that he was rehearsing for a revival of Equus
Equus (play)
Equus is a play by Peter Shaffer written in 1973, telling the story of a psychiatrist who attempts to treat a young man who has a pathological religious fascination with horses....
. He committed suicide a few days later by leaping from a hospital fire escape, whilst a patient at the Atkinson Morley Hospital
Atkinson Morley Hospital
Atkinson Morley Hospital was located at Copse Hill, Wimbledon, London , SW20, England from 1869 until 2003. The hospital was noted as one of the most advanced brain surgery centres in the world, and in particular for the first use of computed tomography on a human being in 1972 by Godfrey...
in Wimbledon, London
Wimbledon, London
Wimbledon is a district in the south west area of London, England, located south of Wandsworth, and east of Kingston upon Thames. It is situated within Greater London. It is home to the Wimbledon Tennis Championships and New Wimbledon Theatre, and contains Wimbledon Common, one of the largest areas...
.