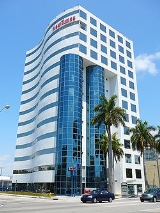 Encyclopedia
The Miami New Times is a free weekly newspaper published in Miami and distributed every Thursday. It primarily serves the Miami area and is headquartered near Miami's Design District.

It was acquired by Village Voice Media, then known as New Times Media, in 1987, when it was fortnightly newspaper called the Wave. As of 2010 it is edited by Chuck Strouse, a former Miami Herald reporter. The paper has won numerous awards including a first place in 2008 among weekly papers from the Investigative Reporters and Editors
Investigative Reporters and Editors
Investigative Reporters and Editors, Inc. is a nonprofit organization that focuses on the quality of investigative reporting. Formed in 1975, it presents the IRE Awards and holds conferences and training classes for journalists. Its headquarters is in Columbia, Missouri, at the University of...
for stories about the Julia Tuttle Causeway sex offender colony
Julia Tuttle Causeway sex offender colony
The Julia Tuttle Causeway sex offender colony was an encampment of registered sex offenders who were living beneath the Julia Tuttle Causeway — a highway in Miami, Florida, from 2006 to April 2010...
In 2010, the paper garnered international attention when it published a story by Brandon K. Thorp and Penn Bullock which revealed that anti-gay activist George Alan Rekers
George Alan Rekers
George Alan Rekers is an American psychologist and ordained Southern Baptist minister. He is emeritus professor of Neuropsychiatry and Behavioral Science at the University of South Carolina School of Medicine....
had hired a male prostitute to accompany him on a trip to Europe.

Former writers for the Miami New Times include authors Steve Almond
Steve Almond
Steve Almond is an American short story writer and essayist. He is the author of eight books.-Life:He was raised in Palo Alto, California, and graduated from Henry M. Gunn High School. He received his undergraduate degree from Wesleyan University. He spent seven years as a newspaper reporter,...
, Sean Rowe
Sean Rowe
Sean Rowe is an alternative folk singer-songwriter and musician.-Early life:Born and raised in Troy, New York, Rowe started playing music at an early age. He received a bass guitar from his father on his 12th birthday and performed in a local band...
, Robert Andrew Powell, Jim DeFede, and Kirk Semple.