Encyclopedia
Mesoplanet is a term coined by Isaac Asimov
Isaac Asimov
Isaac Asimov was an American author and professor of biochemistry at Boston University, best known for his works of science fiction and for his popular science books. Asimov was one of the most prolific writers of all time, having written or edited more than 500 books and an estimated 90,000...
to refer to planetary bodies
Planet
A planet is a celestial body orbiting a star or stellar remnant that is massive enough to be rounded by its own gravity, is not massive enough to cause thermonuclear fusion, and has cleared its neighbouring region of planetesimals.The term planet is ancient, with ties to history, science,...
with sizes smaller than Mercury
Mercury (planet)
Mercury is the innermost and smallest planet in the Solar System, orbiting the Sun once every 87.969 Earth days. The orbit of Mercury has the highest eccentricity of all the Solar System planets, and it has the smallest axial tilt. It completes three rotations about its axis for every two orbits...
but larger than Ceres. Assuming "size" is defined by linear dimension (or by volume), mesoplanets should be approximately 1,000 km to 5,000 km in diameter. The classification would include , , , , 90377 Sedna
90377 Sedna
90377 Sedna is a trans-Neptunian object discovered in 2003, which was about three times as far from the Sun as Neptune. For most of its orbit it is even further from the Sun, with its aphelion estimated at 960 astronomical units , making it one of the most distant known objects in the Solar System...
, 90482 Orcus
90482 Orcus
90482 Orcus is a trans-Neptunian object in the Kuiper belt with a large moon. It was discovered on February 17, 2004 by Michael Brown of Caltech, Chad Trujillo of the Gemini Observatory, and David Rabinowitz of Yale University. Precovery images as early as November 8, 1951 were later identified...
and 50000 Quaoar
50000 Quaoar
50000 Quaoar is a rocky trans-Neptunian object in the Kuiper belt with one known moon. Discovered on June 4, 2002 by astronomers Chad Trujillo and Michael Brown at the California Institute of Technology from images acquired at the Samuel Oschin Telescope at Palomar Observatory, it is thought by...
; it might also include and 20000 Varuna
20000 Varuna
20000 Varuna is a large classical Kuiper belt object and a probable dwarf planet. It previously had the provisional designation ' and has been precovered in plates dating back to 1953.-Name:Varuna is named after the Hindu deity,...
if they are towards the larger end of current estimates. 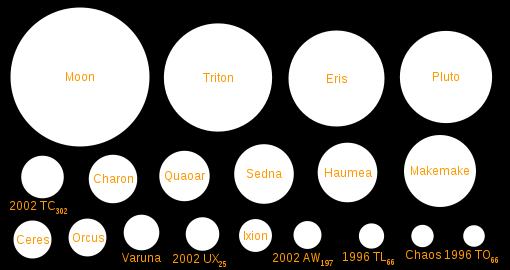 The term was coined in Asimov's essay
Essay
An essay is a piece of writing which is often written from an author's personal point of view. Essays can consist of a number of elements, including: literary criticism, political manifestos, learned arguments, observations of daily life, recollections, and reflections of the author. The definition...
"What's in a Name?
What's in a Name?
"What's in a Name?"' is a mystery short story by Isaac Asimov. It first appeared in the June 1956 issue of The Saint Detective Magazine under the title Death of a Honey-Blonde and was reprinted in the 1968 collection Asimov's Mysteries under its original title.-Plot summary:An unnamed detective...
", which first appeared in The Los Angeles Times
Los Angeles Times
The Los Angeles Times is a daily newspaper published in Los Angeles, California, since 1881. It was the second-largest metropolitan newspaper in circulation in the United States in 2008 and the fourth most widely distributed newspaper in the country....
in the late 1980s and was reprinted in his 1991 book Frontiers; the term was later revisited in his essay, "The Incredible Shrinking Planet" which appeared first in the Magazine of Fantasy and Science Fiction and then in the anthology The relativity of wrong (1988).

Asimov noted that the solar system
Solar System
The Solar System consists of the Sun and the astronomical objects gravitationally bound in orbit around it, all of which formed from the collapse of a giant molecular cloud approximately 4.6 billion years ago. The vast majority of the system's mass is in the Sun...
has a large number of planetary bodies (as opposed to the sun
Sun
The Sun is the star at the center of the Solar System. It is almost perfectly spherical and consists of hot plasma interwoven with magnetic fields...
and natural satellites) and stated that lines dividing "major planets" from minor planet
Minor planet
An asteroid group or minor-planet group is a population of minor planets that have a share broadly similar orbits. Members are generally unrelated to each other, unlike in an asteroid family, which often results from the break-up of a single asteroid...
s were necessarily arbitrary. Asimov then pointed out that there was a large gap in size between Mercury, the smallest planetary body that was considered to be undoubtedly a major planet, and Ceres, the largest planetary body that was considered to be undoubtedly a minor planet. Only one planetary body known at the time, Pluto
Pluto
Pluto, formal designation 134340 Pluto, is the second-most-massive known dwarf planet in the Solar System and the tenth-most-massive body observed directly orbiting the Sun...
, fell within the gap. Rather than arbitrarily decide whether Pluto belonged with the major planets or the minor planets, Asimov suggested that any planetary body that fell within the size gap between Mercury and Ceres be called a mesoplanet, since mesos in the Greek language
Greek language
Greek is an independent branch of the Indo-European family of languages. Native to the southern Balkans, it has the longest documented history of any Indo-European language, spanning 34 centuries of written records. Its writing system has been the Greek alphabet for the majority of its history;...
means "middle".