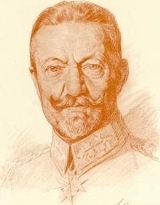 Encyclopedia
Max Karl Wilhelm von Gallwitz (2 May 1852 – 18 April 1937) was a German
Germany
Germany , officially the Federal Republic of Germany , is a federal parliamentary republic in Europe. The country consists of 16 states while the capital and largest city is Berlin. Germany covers an area of 357,021 km2 and has a largely temperate seasonal climate...
general from Breslau (Wrocław), Silesia
Province of Silesia
The Province of Silesia was a province of the Kingdom of Prussia from 1815 to 1919.-Geography:The territory comprised the bulk of the former Bohemian crown land of Silesia and the County of Kladsko, which King Frederick the Great had conquered from the Austrian Habsburg Monarchy in the 18th...
, who served with distinction during World War I
World War I
World War I , which was predominantly called the World War or the Great War from its occurrence until 1939, and the First World War or World War I thereafter, was a major war centred in Europe that began on 28 July 1914 and lasted until 11 November 1918...
on both the Eastern
Eastern Front (World War I)
The Eastern Front was a theatre of war during World War I in Central and, primarily, Eastern Europe. The term is in contrast to the Western Front. Despite the geographical separation, the events in the two theatres strongly influenced each other...
and Western Fronts
Western Front (World War I)
Following the outbreak of World War I in 1914, the German Army opened the Western Front by first invading Luxembourg and Belgium, then gaining military control of important industrial regions in France. The tide of the advance was dramatically turned with the Battle of the Marne...
.

Gallwitz began the war as a corps commander on the Western Front, but was almost immediately transferred east to join the Eighth Army under Hindenburg
Paul von Hindenburg
Paul Ludwig Hans Anton von Beneckendorff und von Hindenburg , known universally as Paul von Hindenburg was a Prussian-German field marshal, statesman, and politician, and served as the second President of Germany from 1925 to 1934....
. In 1915 he took command of Army Group Gallwitz (Twelfth Army) and participated in the Galicia offensive alongside Mackensen
August von Mackensen
Anton Ludwig August von Mackensen , born August Mackensen, was a German soldier and field marshal. He commanded with success during the First World War and became one of the German Empire's most prominent military leaders. After the Armistice, Mackensen was interned for a year...
, who commanded the Eleventh Army. Towards the end of 1915 he succeeded Mackensen as commander of the Eleventh Army, as the latter campaigned against Serbia
Serbian Campaign (World War I)
The Serbian Campaign was fought from late July 1914, when Austria-Hungary invaded Serbia at the outset of the First World War, until late 1915, when the Macedonian Front was formed...
. In 1916 Gallwitz moved back to the Western Front and defended against the British attack in the Battle of the Somme. From 1916-18 he commanded the Fifth Army
German Fifth Army
The 5th Army was a field army of Imperial Germany during World War I and of the Wehrmacht during World War II.-World War I:In August 1914 the command of 5th Army was assigned to Crown Prince Wilhelm of Germany, heir to the Hohenzollern throne, with General Schmidt von Knobelsdorf serving as his...
in the west, most notably engaging the Americans during the Battle of Saint-Mihiel
Battle of Saint-Mihiel
The Battle of Saint-Mihiel was a World War I battle fought between September 12–15, 1918, involving the American Expeditionary Force and 48,000 French troops under the command of U.S. general John J. Pershing against German positions...
.

Following his retirement from the army Gallwitz served as a deputy in the Reichstag
Reichstag (Weimar Republic)
The Reichstag was the parliament of Weimar Republic .German constitution commentators consider only the Reichstag and now the Bundestag the German parliament. Another organ deals with legislation too: in 1867-1918 the Bundesrat, in 1919–1933 the Reichsrat and from 1949 on the Bundesrat...
(1920–24) for the German National People's Party
German National People's Party
The German National People's Party was a national conservative party in Germany during the time of the Weimar Republic. Before the rise of the NSDAP it was the main nationalist party in Weimar Germany composed of nationalists, reactionary monarchists, völkisch, and antisemitic elements, and...
.
The source of this article is wikipedia, the free encyclopedia.  The text of this article is licensed under the GFDL.