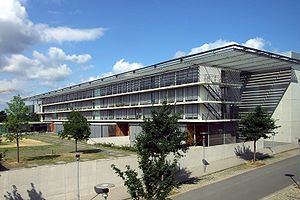 The Max Planck Institute for Biophysics is located in Frankfurt am Main, Germany
Germany
Germany , officially the Federal Republic of Germany , is a federal parliamentary republic in Europe. The country consists of 16 states while the capital and largest city is Berlin. Germany covers an area of 357,021 km2 and has a largely temperate seasonal climate...
. It was founded as Kaiser Wilhelm Institute for Biophysics in 1937, and moved into a new building in 2003. It is one of 80 institutes in the Max Planck Society
Max Planck Society
The Max Planck Society for the Advancement of Science is a formally independent non-governmental and non-profit association of German research institutes publicly funded by the federal and the 16 state governments of Germany....
(Max Planck Gesellschaft).
An essential prerequisite for the understanding of the fundamental processes of life is the knowledge of the structure of the participating macromolecules. Two of the fourt departments are devoted to the challenging task of determining the structure of membrane protein
Membrane protein
A membrane protein is a protein molecule that is attached to, or associated with the membrane of a cell or an organelle. More than half of all proteins interact with membranes.-Function:...
s. Under the direction of Hartmut Michel
Hartmut Michel
Hartmut Michel is a German biochemist and Nobel Laureate.He was born 18 July 1948 in Ludwigsburg. After compulsory military service, he studied biochemistry at the University of Tübingen, working for his final year at Dieter Oesterhelt’s laboratory on ATPase activity of halobacteria.In 1986, he...
(Nobel Prize in Chemistry
Nobel Prize in Chemistry
The Nobel Prize in Chemistry is awarded annually by the Royal Swedish Academy of Sciences to scientists in the various fields of chemistry. It is one of the five Nobel Prizes established by the will of Alfred Nobel in 1895, awarded for outstanding contributions in chemistry, physics, literature,...
of 1988 for the first structure determination of a membrane protein), the Department of Molecular Membrane Biology approaches this problem primarily by x-ray crystallography
X-ray crystallography
X-ray crystallography is a method of determining the arrangement of atoms within a crystal, in which a beam of X-rays strikes a crystal and causes the beam of light to spread into many specific directions. From the angles and intensities of these diffracted beams, a crystallographer can produce a...
, whereas the Department of Structural Biology, headed by Werner Kühlbrandt, uses the complementary technique of electron microscopy. The Department of Biophysical Chemistry, directed by Ernst Bamberg, studies the function of these protein
Protein
Proteins are biochemical compounds consisting of one or more polypeptides typically folded into a globular or fibrous form, facilitating a biological function. A polypeptide is a single linear polymer chain of amino acids bonded together by peptide bonds between the carboxyl and amino groups of...
s in native or reconstituted membranes by electrophysiological and spectroscopic methods. The fourth department "Molecular Neurogenetics" under the direction of Peter Mombaerts has started its work in 2007. Since 2007, the institute hosts two Max-Planck Research Groups: "Computational Structural Biology", led by Lucy R. Forrest, and "Theoretical Molecular Biophysics", directed by José D. Faraldo-Gómez.

Since April 2003, the institute's four departments are housed in the same building, resulting in improved scientific interaction between the research groups. Scientific links to fellow researchers at Frankfurt University have been strengthened further as the institute is now situated next to the University's biology, chemistry and physics laboratories.


A Note on the Institute's History

The institute was founded in Frankfurt
Frankfurt
Frankfurt am Main , commonly known simply as Frankfurt, is the largest city in the German state of Hesse and the fifth-largest city in Germany, with a 2010 population of 688,249. The urban area had an estimated population of 2,300,000 in 2010...
as the "Kaiser Wilhelm Institute for Biophysics" in 1937. However, it had a predecessor, the "Institut für Physikalische Grundlagen der Medizin" which had been established in 1921 by Friedrich Dessauer
Friedrich Dessauer
Friedrich Dessauer was a physicist, a philosopher, a socially engaged entrepreneur and a journalist.Friedrich Dessauer was born in Aschaffenburg, Germany. As a young man he was fascinated by new discoveries in the natural sciences. He was particularly interested in the X-rays discovered by...
, an admirer of Wilhelm Roentgen, who endeavored to apply radiation physics to medicine and biology. Being a conservative member of parliament for the democratic "Zentrumspartei", Dessauer opposed the National Socialists' rise to power and was then forced to emigrate in 1934. His successor, Dessauer's colleague and long-standing collaborator, Boris Rajewsky was the first director of the Kaiser Wilhelm Institute for Biophysics. Rajewsky firstly coined the term "Biophysics" and consequently the institute became one of the first to be known by this name.
The source of this article is wikipedia, the free encyclopedia.  The text of this article is licensed under the GFDL.