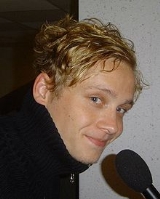 Encyclopedia
Matthias Schweighöfer is a German
Germany
Germany , officially the Federal Republic of Germany , is a federal parliamentary republic in Europe. The country consists of 16 states while the capital and largest city is Berlin. Germany covers an area of 357,021 km2 and has a largely temperate seasonal climate...
actor
Actor
An actor is a person who acts in a dramatic production and who works in film, television, theatre, or radio in that capacity...
. He is sometimes credited as Matthias Schweighofer.

Born in Anklam
Anklam
Anklam is a town in the Western Pomerania region of Mecklenburg-Vorpommern, Germany. It is situated on the banks of the Peene river, just 8 km from its mouth in the Kleines Haff, the western part of the Stettin Lagoon. Anklam has a population of 14,603 and was the capital of the former...
, East Germany, Schweighöfer attended the renowned acting school Hochschule für Schauspielkunst "Ernst Busch", but dropped out after one year. Nevertheless, the son of an actor couple is considered as one of the most promising talents of European Film and has already worked with established directors such as Peter Greenaway
Peter Greenaway
Peter Greenaway, CBE is a British film director. His films are noted for the distinct influence of Renaissance and Baroque painting, and Flemish painting in particular...
. Schweighöfer has been dating Ani Schromm since 2004 and they have a daughter called Greta born May 1, 2009. They currently live in Berlin
Berlin
Berlin is the capital city of Germany and is one of the 16 states of Germany. With a population of 3.45 million people, Berlin is Germany's largest city. It is the second most populous city proper and the seventh most populous urban area in the European Union...
.