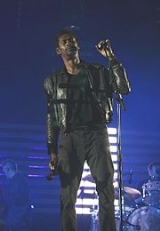 Overview
Massive Attack are an English DJ and trip hop
Trip hop
Trip hop is a music genre consisting of downtempo electronic music which originated in the early 1990s in England, especially Bristol. Deriving from "post"-acid house, the term was first used by the British music media and press as a way to describe the more experimental variant of breakbeat which...
duo from Bristol
Bristol
Bristol is a city, unitary authority area and ceremonial county in South West England, with an estimated population of 433,100 for the unitary authority in 2009, and a surrounding Larger Urban Zone with an estimated 1,070,000 residents in 2007...
, England consisting of Robert "3D" Del Naja
Robert Del Naja
Robert Del Naja , also known as 3D, is an English artist and musician. Initially gaining notoriety as a graffiti artist and member of the Bristol collective known as "The Wild Bunch", Del Naja went on to become a founding member of the band Massive Attack where he is active to this day.-Music:Del...
and Grant "Daddy G" Marshall
Daddy G
Daddy G, , is a British musician and a founding member of the band, Massive Attack.-Music:...
. Working with co-producers, as well as various session musicians and guest vocalists, they make records and tour live. The duo are considered to be progenitors of the trip hop genre. Their debut album, Blue Lines
Blue Lines
-Personnel:* All tracks produced and mixed by Massive Attack, Cameron McVey and Jonny Dollar.** Robert "3D" Del Naja: vocals - keyboards** Grantley "Daddy G" Marshall: vocals** Andrew "Mushroom" Vowles: keyboards# "Safe from Harm"#* Shara Nelson: vocals...
was released in 1991, with the single "Unfinished Sympathy
Unfinished Sympathy
"Unfinished Sympathy" is a song by English electronica group Massive Attack, from their debut album Blue Lines . The song was written collaboratively by the members of the group , with Jonathan "Jonny Dollar" Sharp and Shara Nelson, the latter providing lead vocals for the song...
" reaching the charts and later being voted the 10th greatest song of all time in a poll by The Guardian.

Massive Attack started as a spin-off production trio in 1988, with the independently-released song, "Any Love", sung by falsetto
Falsetto
Falsetto is the vocal register occupying the frequency range just above the modal voice register and overlapping with it by approximately one octave. It is produced by the vibration of the ligamentous edges of the vocal folds, in whole or in part...
-voiced singer-songwriter Carlton McCarthy, and then, with considerable backing from Neneh Cherry
Neneh Cherry
Neneh Mariann Cherry is a Swedish singer-songwriter, rapper, and occasional DJ and broadcaster...
, they signed to Circa Records in 1990 – committing to deliver six studio albums and a "best of" compilation
Compilation album
A compilation album is an album featuring tracks from one or more performers, often culled from a variety of sources The tracks are usually collected according to a common characteristic, such as popularity, genre, source or subject matter...
.

Massive Attack was on the soundtrack of a British film in the late 90's about 2 sisters whose mother had just died [I think}... the younger sister rea...
More
x