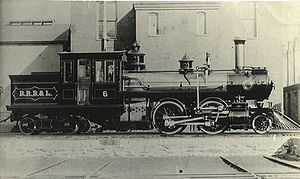 The Mason Bogie is a type of articulated steam locomotive
Steam locomotive
A steam locomotive is a railway locomotive that produces its power through a steam engine. These locomotives are fueled by burning some combustible material, usually coal, wood or oil, to produce steam in a boiler, which drives the steam engine...
suited for sharp curves and uneven track, once commonly used on narrow gauge lines in the United States
United States
The United States of America is a federal constitutional republic comprising fifty states and a federal district...
. The design is a development of the single Fairlie
Fairlie
A Fairlie is a type of articulated steam locomotive that has the driving wheels on bogies. The locomotive may be double-ended or single ended...
, and is sometimes, and perhaps more properly known as the Mason Fairlie.

The American licensee of the Fairlie
Fairlie
A Fairlie is a type of articulated steam locomotive that has the driving wheels on bogies. The locomotive may be double-ended or single ended...
Patent steam locomotive was the firm of William Mason
William Mason (locomotive builder)
William Mason was a master mechanical engineer and builder of textile machinery and railroad steam locomotives. He founded Mason Machine Works of Taunton, Massachusetts. His company was a significant supplier of locomotives and rifles for the Union Army during the American Civil War...
, located in Taunton, Massachusetts
Taunton, Massachusetts
Taunton is a city in Bristol County, Massachusetts, United States. It is the seat of Bristol County and the hub of the Greater Taunton Area. The city is located south of Boston, east of Providence, north of Fall River and west of Plymouth. The City of Taunton is situated on the Taunton River...
. It became obvious that, for all the Fairlie locomotive's advantages, its disadvantages outweighed them. Mason developed an improved design, called the Mason-Fairlie, or more commonly the Mason Bogie (the word bogie
Bogie
A bogie is a wheeled wagon or trolley. In mechanics terms, a bogie is a chassis or framework carrying wheels, attached to a vehicle. It can be fixed in place, as on a cargo truck, mounted on a swivel, as on a railway carriage/car or locomotive, or sprung as in the suspension of a caterpillar...
is the British word for truck
Truck
A truck or lorry is a motor vehicle designed to transport cargo. Trucks vary greatly in size, power, and configuration, with the smallest being mechanically similar to an automobile...
in the railroad sense). Similar locomotives developed in England were known as Single Fairlies.

Mason's idea was to remove what American railroad men saw as the biggest disadvantages of the Fairlie - its cramped space for fuel and water caused by its double ended design (not very useful on American railroads where there was always ample room for a turntable
Turntable (railroad)
A railway turntable is a device for turning railroad rolling stock. When steam locomotives were still in wide use, many railroads needed a way to turn the locomotives around for return trips as their controls were often not configured for extended periods of running in reverse and in many...
or wye
Wye (railroad)
A wye or triangular junction, in rail terminology, is a triangular shaped arrangement of rail tracks with a switch or set of points at each corner. In mainline railroads, this can be used at a rail junction, where three rail lines join, in order to allow trains to pass from any line to any other...
), its cramped cab caused by the joined double boilers, and to some degree its poor riding.

He did this by removing one boiler of the double Fairlie and retaining only one power truck at the front. A much larger cab was fitted, and a fuel bunker and water tank behind the cab, supported by a trailing truck. The advantages of the Fairlie design were kept; the swivelling driven truck for a greater ability to negotiate curves, and the large open space between the trucks to fit a large firebox unrestricted by the wheels.

The Mason Bogie was still, though, plagued by one of the biggest problems of the Fairlie - the jointed steam pipes to the driven truck leaked far too much steam. Mason eventually changed to a different scheme, in which the pivot point for the leading truck became a hollow ball joint through which the live steam for the cylinders passed, and a sliding affair for the exhaust atop the moving cylinder saddle. Although better, this was still not great, and it also took up much valuable space in between the driving wheels, requiring Mason to use an outside valve gear, generally the Walschaerts valve gear. Additionally, to provide extra space, the reversing shaft had to be mounted atop the boiler, with long bars dropping down to the die blocks, a feature unique to Mason Bogies.

Approximately 146 Mason Bogies were produced by William Mason's firm between 1871 and 1890 when the firm built its last locomotive, of which 88 or so were narrow gauge units, the rest being standard gauge
Standard gauge
The standard gauge is a widely-used track gauge . Approximately 60% of the world's existing railway lines are built to this gauge...
. This was about half the firm's total output of locomotives during this period. Major buyers included the Boston, Revere Beach & Lynn Railroad, a suburban carrier which owned 32, the Denver, South Park and Pacific Railroad
Denver, South Park and Pacific Railroad
The Denver, South Park, and Pacific Railroad was a historic narrow gauge railway that operated in Colorado in the western United States in the late 19th century. The railroad opened up the first rail routes to a large section of the central Colorado mining district in the decades of the mineral boom...
, a Colorado common-carrier railroad which owned 23, and the New York and Manhattan Beach Railroad, another suburban carrier, which ran seventeen locomotives of this pattern.

The best-known locomotives were those on the Denver, South Park & Pacific, and they rostered fairly large Mason Bogies, mostly of 2-6-6 and 2-8-6 wheel arrangements, and had a lot of success with them. Even here, though, the other problem with the Fairlie design showed itself, which was the surprisingly poor tracking of the powered bogie. It would both hunt, or wander, when on straight track, yet provide more resistance to turning when it hit curvature than might be thought. This manifested itself in much greater wear on wheels and track than might have been expected.

The type had its possibly most notable success on the aforementioned Boston, Revere Beach & Lynn, which liked Mason Bogies so much that it continued to purchase them even after the closure of the William Mason factory, ordering similar locomotives from other builders as late as 1914 and operating them until electrification in 1928. It must be said, though, that the special features of the Mason Bogie weren't really used in this application, since the line was not greatly curved and did not need the flexibility the Mason Bogie bought at the cost of quite some complexity.

At least one Mason Bogie, Torch Lake, survives, at Greenfield Village (part of The Henry Ford
The Henry Ford
The Henry Ford, a National Historic Landmark, , in the Metro Detroit suburb of Dearborn, Michigan, USA, is a large indoor and outdoor history museum complex...
) in Dearborn, Michigan
Dearborn, Michigan
-Economy:Ford Motor Company has its world headquarters in Dearborn. In addition its Dearborn campus contains many research, testing, finance and some production facilities. Ford Land controls the numerous properties owned by Ford including sales and leasing to unrelated businesses such as the...
, an 0-6-4. It was built in 1873 and still hauls passengers during the summer months. 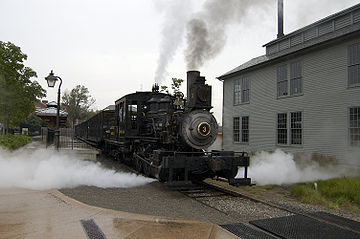 Superficially similar to the Mason Bogie is another design, the Forney locomotive
Forney locomotive
The Forney is a type of tank locomotive patented by Matthias N. Forney between 1861 and 1864. Forney locomotives include the following characteristics:* An 0-4-4T wheel arrangement, that is four driving wheels followed by a truck with four wheels....
. Like the Mason Bogie, the Forney has powered axles under the boiler and a trailing truck under the rear bunker and tank behind the cab. However, the Forney's driving wheels are fixed in the frame, rather than articulated. They were reasonably popular on American narrow gauge railroads.