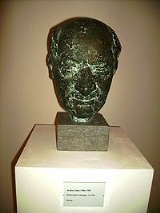 Overview
Martin Heidegger was a German
Germany
Germany , officially the Federal Republic of Germany , is a federal parliamentary republic in Europe. The country consists of 16 states while the capital and largest city is Berlin. Germany covers an area of 357,021 km2 and has a largely temperate seasonal climate...
philosopher
Philosophy
Philosophy is the study of general and fundamental problems, such as those connected with existence, knowledge, values, reason, mind, and language. Philosophy is distinguished from other ways of addressing such problems by its critical, generally systematic approach and its reliance on rational...
known for his existential and phenomenological explorations of the "question of Being
Being
Being , is an English word used for conceptualizing subjective and objective aspects of reality, including those fundamental to the self —related to and somewhat interchangeable with terms like "existence" and "living".In its objective usage —as in "a being," or "[a] human being" —it...
."

His central belief was that philosophy, and society as a whole, was preoccupied with what it is that exists. His belief was that we find ourselves "always already" fallen into a world that already existed. But he insisted that we had forgotten the basic question of what it is to exist, of what being itself is.

How does Martin Heidegger see human existence from view point of its end?
More

Why has the concept of reflective dialogue been overlooked as a social services tool between those in need & those providing services?
More

Why is there Being at all, and not much rather Nothing? That is the question.

What is peddled about nowadays as philosophy, especially that of National Socialism|N.S., but has nothing to do with the inner truth and greatness of that movement [namely the encounter between global technology and modern humanity] is nothing but fishing in that troubled sea of values and totalities.

The human body is essentially something other than an animal organism.

The human being is not the lord of beings, but the shepherd of Being.

Language is the house of the truth of Being.

Everywhere we remain unfree and chained to technology, whether we passionately affirm or deny it. But we are delivered over to it in the worst possible way when we regard it as something neutral; for this conception of it, to which today we particularly like to do homage, makes us utterly blind to the essence of technology.