Encyclopedia
Martin-Baker Aircraft Co. Ltd. is a manufacturer of ejection seats and safety related equipment for aviation. The company origins were as an aircraft manufacturer before becoming a pioneer in the field of ejection seats. The company's headquarters are in Higher Denham
Denham, Buckinghamshire
Denham is a village and civil parish in the South Buckinghamshire district of Buckinghamshire, England. It is north west of Uxbridge and north of junction 1 of the M40 motorway. Denham contains the Buckinghamshire Golf Club.-Origin:...
, Buckinghamshire
Buckinghamshire
Buckinghamshire is a ceremonial and non-metropolitan home county in South East England. The county town is Aylesbury, the largest town in the ceremonial county is Milton Keynes and largest town in the non-metropolitan county is High Wycombe....
, England
England
England is a country that is part of the United Kingdom. It shares land borders with Scotland to the north and Wales to the west; the Irish Sea is to the north west, the Celtic Sea to the south west, with the North Sea to the east and the English Channel to the south separating it from continental...
with other locations in France, Italy and United States.

Martin-Baker supplies ejection seats for 93 air forces worldwide. Martin-Baker seats have been fitted into over 80 fixed-wing and rotary types with the most recent being the JSF F-35 programme.

Since the first live ejection test in 1946, 7,364 lives have been saved by Martin-Baker ejection seats.

Martin and Baker designed an unconventional, two-place, low-wing monoplane design in the early 1930s as the MB-1. This was powered by a de Havilland Gipsy
De Havilland Gipsy
The de Havilland Gipsy is a British air-cooled 4-cylinder in-line aircraft engine designed by Frank Halford in 1927 to replace the ADC Cirrus in the de Havilland D.H.60 Moth light biplane....
engine mounted in the fuselage behind the seats and driving a fixed pitch propeller through a shaft running horizontally between the pilot and passenger. The project was abandoned due to financial constraints, although the fuselage and engine installation had been completed. Martin-Baker also constructed an autogyro
Autogyro
An autogyro , also known as gyroplane, gyrocopter, or rotaplane, is a type of rotorcraft which uses an unpowered rotor in autorotation to develop lift, and an engine-powered propeller, similar to that of a fixed-wing aircraft, to provide thrust...
designed by Raoul Hafner
Raoul Hafner
Raoul Hafner, , was an Austrian-born British helicopter pioneer and engineer.Raoul Hafner, FEng, FRAes, a pioneer of rotating wing aircraft design, died as a result of a yachting accident, was an Austrian who made a distinctive contribution to the British aerospace industry, particularly the...
. This, their first complete aircraft project, was later tested by Captain Baker at Heston Aerodrome
Heston Aerodrome
Heston Aerodrome was a 1930s airfield located to the west of London, UK, operational between 1929 and 1947. It was situated on the border of the Heston and Cranford areas of Hounslow, Middlesex...
.

Martin-Baker manufactured aircraft components, including armoured seats for Supermarine Spitfire
Supermarine Spitfire
The Supermarine Spitfire is a British single-seat fighter aircraft that was used by the Royal Air Force and many other Allied countries throughout the Second World War. The Spitfire continued to be used as a front line fighter and in secondary roles into the 1950s...
s, throughout the Second World War. In 1944 the company was approached by the Ministry of Aircraft Production to investigate ejection systems enabling pilots to bail out safely from high-speed fighter aircraft. 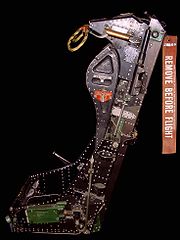 Martin-Baker investigated ejection seats from 1934 onward, several years before Germany (1938) and Sweden. The company concluded that an explosive-powered ejection seat was the best solution. In particular, Baker's death in 1942 during a test flight affected his partner Martin so much that pilot safety became his primary focus and led to the later reorganisation of the company to focus primarily on ejection seats.

In 1944, James Martin was invited by the then Ministry of Aircraft Production to investigate the practicability of providing fighter aircraft with a means of assisted escape for the pilot.

The need for such an escape system was accentuated by the death in January 1944, of a Royal Aircraft Establishment
Royal Aircraft Establishment
The Royal Aircraft Establishment , was a British research establishment, known by several different names during its history, that eventually came under the aegis of the UK Ministry of Defence , before finally losing its identity in mergers with other institutions.The first site was at Farnborough...
Test Pilot who encountered an emergency whilst testing an early version of the Gloster Meteor
Gloster Meteor
The Gloster Meteor was the first British jet fighter and the Allies' first operational jet. It first flew in 1943 and commenced operations on 27 July 1944 with 616 Squadron of the Royal Air Force...
. Although he escaped from the aircraft by the standard over the side technique, he was injured in the process, lost consciousness and consequently made no attempt to open his parachute. After investigating alternative schemes, it soon became apparent that the most attractive means would be by forced ejection of the seat with the occupant sitting in it, and that the most effective means of doing this would be by an explosive charge. After ejection, the pilot would fall away from the seat and open his parachute by pulling a ripcord in the usual way. This also fitted in with Air Staff
Air Staff
The Air Staff is one of the Department of the Air Force's two statutorily designated headquarters staffs: the other staff is the Office of the Secretary of the Air Force, also known as the Secretariat. The Air Staff is headed by the Chief of Staff of the Air Force . The Air Staff is primarily...
requirements at that time, that any ejection system should be designed to “utilise existing safety equipment”.

At that time there was no information on what the human body could withstand in the form of upward compressive thrust. Some data was available concerning somewhat lower g forces applied horizontally in catapult launching of aircraft, but it was inapplicable to the new problem. It therefore became necessary to carry out tests to determine the amount of upward g force the human frame would tolerate, and the idea was conceived of shooting a seat up a near-vertical path, loading the seat to represent the weight of the occupant, and measuring the accelerations involved.

A 16 foot test rig was built in the form of a tripod, one of the legs being in the form of guide rails. The seat was propelled up the guide rails by a gun, consisting of two telescopic tubes energised by an explosive cartridge. The guide rails were provided with ratchet stops every 3 inches, so that the seat was automatically arrested at the top of its travel.

Studies were conducted to find the limits of upward acceleration that the human body could stand. The first dummy shot with the seat loaded to 200 lb was made on 20 January 1945, and four days later one of the company’s experimental fitter
Fitter
Fitter may refer to:* Fitter , a Soviet attack aircraft* Fitter , a person who uses machine tools to make or modify parts* Comparative of the adjective "fit"-People named Fitter:* Alastair Fitter, British ecologist...
s, Mr. Bernard Lynch, undertook the first “live” ride, being shot up the rig to a height of 4 feet 8 inches. In three further tests, the power of the cartridge was progressively increased until a height of 10 feet was reached, at which stage Lynch reported the onset of considerable physical discomfort. The first seat was successfully live tested by Lynch on 24 July 1946, who ejected from a Gloster Meteor
Gloster Meteor
The Gloster Meteor was the first British jet fighter and the Allies' first operational jet. It first flew in 1943 and commenced operations on 27 July 1944 with 616 Squadron of the Royal Air Force...
travelling at 320 miles per hour (515 km/h) IAS
Airspeed indicator
The airspeed indicator or airspeed gauge is an instrument used in an aircraft to display the craft's airspeed, typically in knots, to the pilot.- Use :...
at 8000 feet (2,438.4 m) over Chalgrove Airfield
Chalgrove Airfield
Chalgrove Airfield is a former World War II airfield in Oxfordshire, England. The airfield is located approximately north-northeast of Benson; about north-northwest of London....
in Oxfordshire
Oxfordshire
Oxfordshire is a county in the South East region of England, bordering on Warwickshire and Northamptonshire , Buckinghamshire , Berkshire , Wiltshire and Gloucestershire ....
.

Martin-Baker was a pioneer in expanding the operational envelope of the ejection seat to enable it to be used at low altitudes and airspeeds leading eventually to a "zero-zero" capability.

The Company also sponsors an "Ejection Tie Club," producing a specialised tie, patch, certificate, tie pin and membership card for those whose lives have been saved by a Martin-Baker ejection seat.

The company maintains its own airfield, Chalgrove Airfield
Chalgrove Airfield
Chalgrove Airfield is a former World War II airfield in Oxfordshire, England. The airfield is located approximately north-northeast of Benson; about north-northwest of London....
, in Oxfordshire for operational testing of ejection seats. A second airfield (the former RAF Langford Lodge
RAF Langford Lodge
RAF Langford Lodge is a former Royal Air Force station near Belfast, Northern Ireland. Today the airfield is owned by RLC a subsidiary of RLC Engineering Group which is head quartered in the Isle of Man...
near Crumlin in County Antrim
County Antrim
County Antrim is one of six counties that form Northern Ireland, situated in the north-east of the island of Ireland. Adjoined to the north-east shore of Lough Neagh, the county covers an area of 2,844 km², with a population of approximately 616,000...
) is also used for testing, and houses a 6200 feet (1,889.8 m) high-speed rocket sled
Rocket sled
A rocket sled is a test platform that slides along a set of rails, propelled by rockets.As its name implies, a rocket sled does not use wheels. Instead, it has sliding pads, called "slippers", which are curved around the head of the rails to prevent the sled from flying off the track...
track.

Two Gloster Meteor aircraft, WL419 and WA638, remain in service with the company as flying testbeds. Another Meteor (WA634), used in early development of ejection seats, is retained at the RAF Museum
RAF Museum
The Royal Air Force Museum London, commonly known as the RAF Museum, is a museum located on the former Hendon Aerodrome, dedicated to the history of aviation and the British Royal Air Force. The museum is a non-departmental public body sponsored by the Ministry of Defence and a registered charity...
at RAF Cosford
RAF Cosford
RAF Cosford is a Royal Air Force station in Cosford, Shropshire, just to the northwest of Wolverhampton and next to Albrighton.-History:...
.