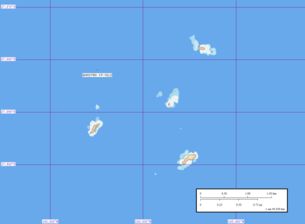 Marotiri is a group of four uninhabited volcanic
Volcano
2. Bedrock3. Conduit 4. Base5. Sill6. Dike7. Layers of ash emitted by the volcano8. Flank| 9. Layers of lava emitted by the volcano10. Throat11. Parasitic cone12. Lava flow13. Vent14. Crater15...
rocks protruding from the sea (and several submerged rocks), forming the southeastern end of the Austral Islands
Austral Islands
The Austral Islands are the southernmost group of islands in French Polynesia, an overseas collectivity of France in the South Pacific. Geographically, they consist of two separate archipelagos, namely in the northwest the Tubuai Islands consisting of the Îles Maria, Rimatara, Rurutu, Tubuai...
of French Polynesia
French Polynesia
French Polynesia is an overseas country of the French Republic . It is made up of several groups of Polynesian islands, the most famous island being Tahiti in the Society Islands group, which is also the most populous island and the seat of the capital of the territory...
. Marotiri is located at 27°55′00"S 143°26′00"W. The closest island is Rapa Iti
Rapa Iti
Rapa or Rapa Iti as it is sometimes called in more recent years , is the largest and only inhabited island of the Bass Islands in French Polynesia. An older name for the island is Oparo Its area is 40 km2 with a population of almost 500 and a max elevation of 650 m...
, 75 km further northwest, but separated from it by an ocean depth of more than 1,500 meters. The rocks are part of the municipality
Municipality
A municipality is essentially an urban administrative division having corporate status and usually powers of self-government. It can also be used to mean the governing body of a municipality. A municipality is a general-purpose administrative subdivision, as opposed to a special-purpose district...
of Rapa.

The climate is wet temperate. The rocks are almost devoid of vegetation. They are important as a seabird rookery. The waters around the rocks abound in fish.

The rocks emerge from a submarine platform 100 meters deep and 5 km in diameter
Diameter
In geometry, a diameter of a circle is any straight line segment that passes through the center of the circle and whose endpoints are on the circle. The diameters are the longest chords of the circle...
. They lie at a distance between 1.5 and 3 km from one another. The total land area is 43,100 m², which is broken down as follows by the individual rocks:


The southern rock is the largest, and with a height of 113 meters the highest.

Marotiri is also known as Bass Rocks (Îlots de Bass in French), maybe according to the name of the European explorer George Bass
George Bass
George Bass was a British naval surgeon and explorer of Australia.-Early years:He was born on 30 January 1771 at Aswarby, a hamlet near Sleaford, Lincolnshire, the son of a tenant farmer, George Bass, and a local beauty named Sarah Nee Newman. His father died in 1777 when Bass was 6...
.
The source of this article is wikipedia, the free encyclopedia.  The text of this article is licensed under the GFDL.