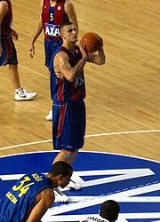 Encyclopedia
Mario Kasun is a Croatia
Croatia
Croatia , officially the Republic of Croatia , is a unitary democratic parliamentary republic in Europe at the crossroads of the Mitteleuropa, the Balkans, and the Mediterranean. Its capital and largest city is Zagreb. The country is divided into 20 counties and the city of Zagreb. Croatia covers ...
n professional basketball player. Currently he is a member of Croatian club KK Zagreb
KK Zagreb
Košarkaški klub Zagreb is a professional basketball club based in Zagreb, Croatia. It competes in the Croatian League, the Adriatic League and in the 2011/12 season for the first time in ULEB Euroleague...
.

Kasun started playing basketball at a local club in Delnice
Delnice
Delnice is a town in western Croatia, the largest settlement in the mountainous region of Gorski Kotar, in the Primorje-Gorski Kotar county. The town has a population of 4,451 , total municipality population is 6,858. Delnice is Gorski Kotar's main town...
when he was 14, before he started playing professionally with BC Zrinjevac in Zagreb
Zagreb
Zagreb is the capital and the largest city of the Republic of Croatia. It is in the northwest of the country, along the Sava river, at the southern slopes of the Medvednica mountain. Zagreb lies at an elevation of approximately above sea level. According to the last official census, Zagreb's city...
. He was part of the 1998-99 Croatian junior team and the Croatian under-21 team in 2000.

Kasun played at 2002 NBA pre-draft camp in Chicago
Chicago
Chicago is the largest city in the US state of Illinois. With nearly 2.7 million residents, it is the most populous city in the Midwestern United States and the third most populous in the US, after New York City and Los Angeles...
, being one of the tallest players, and showing some center skills. During 50 minutes over three games, he totalled 20 points and had 14 rebounds and six blocked shots, converting nine of 17 shots (52.9%). In 2002, he was initially selected by the National Basketball Association
National Basketball Association
The National Basketball Association is the pre-eminent men's professional basketball league in North America. It consists of thirty franchised member clubs, of which twenty-nine are located in the United States and one in Canada...
's (NBA) Los Angeles Clippers
Los Angeles Clippers
The Los Angeles Clippers are a professional basketball team based in Los Angeles, California, United States. They play in the Pacific Division of the Western Conference of the National Basketball Association...
in the second round (41st overall) of the 2002 NBA Draft
2002 NBA Draft
The 2002 NBA Draft was held on June 26, 2002 at The Theater at Madison Square Garden in New York City, New York. In this draft, National Basketball Association teams took turns selecting 57 amateur college basketball players and other first-time eligible players, such as players from non-North...
. On June 26, he was traded by the Clippers to the Orlando Magic
Orlando Magic
The Orlando Magic is a professional basketball team based in Orlando, Florida. They play in the Southeast Division of the Eastern Conference of the National Basketball Association and are currently coached by Stan Van Gundy...
in exchange for future considerations. Regardless of this, he then moved to Germany
Germany
Germany , officially the Federal Republic of Germany , is a federal parliamentary republic in Europe. The country consists of 16 states while the capital and largest city is Berlin. Germany covers an area of 357,021 km2 and has a largely temperate seasonal climate...
to play for the Deutsche Bank Skyliners
Deutsche Bank Skyliners
Skyliners Frankfurt, currently known as Fraport Skyliners for sponsorship reasons, is a basketball club based in Frankfurt, Germany that has played in the Basketball Bundesliga since 1999. They have won the national club competition 2000 and the national championship 2004...
, based in Frankfurt
Frankfurt
Frankfurt am Main , commonly known simply as Frankfurt, is the largest city in the German state of Hesse and the fifth-largest city in Germany, with a 2010 population of 688,249. The urban area had an estimated population of 2,300,000 in 2010...
. With them he won the German championship and also appeared in the 2003-2004 ULEB Cup
ULEB Cup
Eurocup Basketball is the second-tier level transnational professional basketball competition in Europe. The Eurocup is the level that is one tier below the Turkish Airlines Euroleague level...
.

In 2004, he returned to the US to play for the Orlando Magic
Orlando Magic
The Orlando Magic is a professional basketball team based in Orlando, Florida. They play in the Southeast Division of the Eastern Conference of the National Basketball Association and are currently coached by Stan Van Gundy...
. In the 2004–05 season he played in 45 games for Orlando and averaged 7.9 minutes per game. In 2005–06, he appeared in 28 games.

In July 2006 he returned to Europe again, signing with FC Barcelona and later in 2008 with Efes Pilsen.

In August 2010 he returned to Croatia
Croatia
Croatia , officially the Republic of Croatia , is a unitary democratic parliamentary republic in Europe at the crossroads of the Mitteleuropa, the Balkans, and the Mediterranean. Its capital and largest city is Zagreb. The country is divided into 20 counties and the city of Zagreb. Croatia covers ...
and signed a one-year contract with KK Zagreb
KK Zagreb
Košarkaški klub Zagreb is a professional basketball club based in Zagreb, Croatia. It competes in the Croatian League, the Adriatic League and in the 2011/12 season for the first time in ULEB Euroleague...
.

Kasun was part of the Croatian national basketball team at Eurobasket 2005
Eurobasket 2005
The EuroBasket 2005 was held in Serbia and Montenegro between 16 September and 25 September 2005. Greece won the gold medal by defeating Germany, while France won the bronze medal over Spain...
, Eurobasket 2007
Eurobasket 2007
-Group B:-Group C:-Group D:-Second round:- Group E :- Group F :-Championship bracket:- Quarterfinals :-Classification rounds:- Semifinals :- Third place game:- Final :...
and Eurobasket 2009
EuroBasket 2009
The EuroBasket 2009 was the 36th EuroBasket, the biennial regional basketball championship contested by European nations and held by FIBA Europe. The tournament, which was hosted by Poland, began on 7 September 2009 and concluded with the final on 20 September 2009...
. After a disappointing result for Croatia in the Eurobasket 2009, Mario Kasun announced his retirement from the national team with this words: "This was my last game for the national team. Every time I gave everything on the court, but it seems that is not enough. I need the summer to rest and not be injured. Obviously I am not stable in the head anymore."

Kasun is famous for his tattoos, of which he has 30. He got his first when he was only 15.

His tattoos are mostly related with faith and his family. On his right forearm and wrist he has an angel and four letters: E, D, M and A. Those represent the first letter on the name of every member in his family: E for his sister "Eva", D for his father, "Drago" (angels, inner side of right biceps
Biceps
Biceps may refer to:*Biceps brachii muscle, a muscle located on the inside of the upper arm*Biceps femoris muscle, one of the hamstring muscles of the back of each thigh*Biceps , a point in a metrical pattern...
), M is meant for his own name, "Mario" and A for mother "Ankica" (right rib
Rib
In vertebrate anatomy, ribs are the long curved bones which form the rib cage. In most vertebrates, ribs surround the chest, enabling the lungs to expand and thus facilitate breathing by expanding the chest cavity. They serve to protect the lungs, heart, and other internal organs of the thorax...
). On his back he has a big tattoo of another angel, which he describes as “watching my back”.