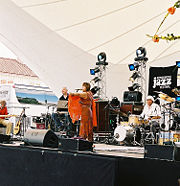 Mari Boine, previously known as Mari Boine Persen, (born 8 November 1956) is a Norwegian
Norway
Norway , officially the Kingdom of Norway, is a Nordic unitary constitutional monarchy whose territory comprises the western portion of the Scandinavian Peninsula, Jan Mayen, and the Arctic archipelago of Svalbard and Bouvet Island. Norway has a total area of and a population of about 4.9 million...
Sami
Sami people
The Sami people, also spelled Sámi, or Saami, are the arctic indigenous people inhabiting Sápmi, which today encompasses parts of far northern Sweden, Norway, Finland, the Kola Peninsula of Russia, and the border area between south and middle Sweden and Norway. The Sámi are Europe’s northernmost...
musician known for having added jazz
Jazz
Jazz is a musical style that originated at the beginning of the 20th century in African American communities in the Southern United States. It was born out of a mix of African and European music traditions. From its early development until the present, jazz has incorporated music from 19th and 20th...
and rock to the yoik
Yoik
A joik, , luohti, vuolle, leu'dd, or juoiggus is a traditional Sami form of song.Originally, joik referred to only one of several Sami singing styles, but in English the word is often used to refer to all types of traditional Sami singing...
s of her native people. Gula Gula (first released by Iđut, 1989, later re-released by Real World
Real World Records
Real World Records is a record label started in 1989 by Peter Gabriel to record and produce world music.-Overview:The label grew up alongside the success of the WOMAD festivals and Peter Gabriel's exploration of music from other cultures, and helped push world music into the general public's...
) was her breakthrough release, and she continued to record popular albums throughout the 1990s.

Boine was born and raised in Gámehisnjárga, a village on the river Anarjohka in Karasjok
Karasjok
Kárášjohka or is a village and municipality in Finnmark county, Norway. The administrative centre of the municipality is the village of Karasjok.-Name:Karasjok is a Norwegianized form of the Sámi name Kárášjohka...
municipality in Finnmark
Finnmark
or Finnmárku is a county in the extreme northeast of Norway. By land it borders Troms county to the west, Finland to the south and Russia to the east, and by water, the Norwegian Sea to the northwest, and the Barents Sea to the north and northeast.The county was formerly known as Finmarkens...
, in the far north of Norway
Norway
Norway , officially the Kingdom of Norway, is a Nordic unitary constitutional monarchy whose territory comprises the western portion of the Scandinavian Peninsula, Jan Mayen, and the Arctic archipelago of Svalbard and Bouvet Island. Norway has a total area of and a population of about 4.9 million...
.

Boine's parents were Sami (Lapps). They made a living from salmon fishing and farming. She grew up steeped in the region's natural environment, but also amidst the strict Laestadian Christian movement with discrimination against her people: for example, singing in the traditional Sami joik style was considered 'the devil's work'. The local school that Boine attended reflected a very different world from her family's. All the teaching was in Norwegian.

As Boine grew up, she started to rebel against being an inferior Lappish woman in Norwegian society. For instance, the booklet accompanying the CD 'Leahkastin' (Unfolding) is illustrated with photographs with racist captions like "Lapps report for anthropological measurement", "Typical female Lapp", "A well-nourished Lapp"; and it ends with a photo of Boine herself as a girl, captioned "Mari, one of the rugged Lapp-girl types" and attributed "(Photo: Unidentified priest)".

When Boine's album Gula Gula was first released on Peter Gabriel
Peter Gabriel
Peter Brian Gabriel is an English singer, musician, and songwriter who rose to fame as the lead vocalist and flautist of the progressive rock group Genesis. After leaving Genesis, Gabriel went on to a successful solo career...
's RealWorld label in July 1990, its front cover (see illustration) showed an iconic image of the tundra
Tundra
In physical geography, tundra is a biome where the tree growth is hindered by low temperatures and short growing seasons. The term tundra comes through Russian тундра from the Kildin Sami word tūndâr "uplands," "treeless mountain tract." There are three types of tundra: Arctic tundra, alpine...
of the far north, the eye of a Snowy Owl
Snowy Owl
The Snowy Owl is a large owl of the typical owl family Strigidae. The Snowy Owl was first classified in 1758 by Carolus Linnaeus, the Swedish naturalist who developed binomial nomenclature to classify and organize plants and animals. The bird is also known in North America as the Arctic Owl, Great...
. The front cover curiously did not show the name of the album, or the name or face of Marie Boine herself; the back cover printed the name 'Mari Boine Persen', the Persen surname identifying her as a Norwegian
Norwegians
Norwegians constitute both a nation and an ethnic group native to Norway. They share a common culture and speak the Norwegian language. Norwegian people and their descendants are found in migrant communities worldwide, notably in United States, Canada and Brazil.-History:Towards the end of the 3rd...
rather than a Sami. On the 2007 release on her own Lean label, the album cover explicitly names Mari Boine with her Sami surname, and shows her (see illustration) in full Sami costume as a shamanistic dancer of her own people, while the white background, like the Snowy Owl of the original release, hints at the snows of the north.

Boine was asked to perform at the 1994 Winter Olympics
1994 Winter Olympics
The 1994 Winter Olympics, officially known as the XVII Olympic Winter Games, was a winter multi-sport event celebrated from 12 to 27 February 1994 in and around Lillehammer, Norway. Lillehammer failed to win the bid for the 1992 event. Lillehammer was awarded the games in 1988, after having beat...
in Lillehammer
Lillehammer
is a town and municipality in Oppland county, Norway, globally known for hosting the 1994 Winter Olympics. It is part of the traditional region of Gudbrandsdal. The administrative centre of the municipality is the town of Lillehammer. As of May 2011, the population of the town of Lillehammer was...
, but refused because she perceived the invitation as an attempt to bring a token
Tokenism
In the arts, employment, and politics, tokenism is a policy or practice of limited inclusion or artistic and/or political representation of members of a traditionally marginalized group, usually creating a false appearance of inclusive practices rather than discrimination, intentional or not...
minority to the ceremonies.

Boine's songs are strongly rooted in her experience of being in a despised minority. For example, the song 'Oppskrift for Herrefolk' (Recipe for a Master Race) on her breakthrough CD 'Gula Gula', sung in Norwegian unlike the rest of the songs which are in Sami, speaks directly of 'discrimination and hate', and ironically recommends ways of oppressing a minority: "Use bible and booze and bayonet"; "Use articles of law against ancient rights".

Boine's other songs are more positive, often singing of the beauty and wildness of Sapmi (Lapland). The title track of 'Gula Gula' asks the listener to remember 'that the earth is our mother'.

Rootsworld, interviewing Boine in 2002, described her as "an unofficial Sami cultural ambassador".

The Guardian
The Guardian
The Guardian, formerly known as The Manchester Guardian , is a British national daily newspaper in the Berliner format...
, in its 2010 F&M playlist of songs "they just can't turn off", describes My Friend of Angel Tribe with the words "Norwegian Sami singer Boine, with this soft, melancholy and utterly mesmerising song."