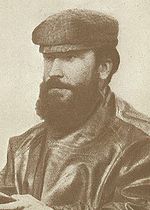 Marcel Renault was a French
France
The French Republic , The French Republic , The French Republic , (commonly known as France , is a unitary semi-presidential republic in Western Europe with several overseas territories and islands located on other continents and in the Indian, Pacific, and Atlantic oceans. Metropolitan France...
racing car driver and industrialist, co-founder of the car maker Renault
Renault
Renault S.A. is a French automaker producing cars, vans, and in the past, autorail vehicles, trucks, tractors, vans and also buses/coaches. Its alliance with Nissan makes it the world's third largest automaker...
, and the brother of Louis
Louis Renault (industrialist)
Louis Renault was a French industrialist, one of the founders of Renault and a pioneer of the automobile industry....
and Fernand Renault.

He and his brothers jointly founded the Renault company on 25 February 1899. He and Louis raced the cars it built starting the next year. He died at the age of 31 on 25 May 1903 of severe injuries he sustained the day before in the Paris-Madrid race
Paris-Madrid race
The Paris–Madrid race of May 1903 was an early experiment in auto racing, organized by the Automobile Club de France and by the Spanish Automobile Club, Automóvil Club Español....
.

After his death, a statue was built in his memory which later would be destroyed by the German
Germany
Germany , officially the Federal Republic of Germany , is a federal parliamentary republic in Europe. The country consists of 16 states while the capital and largest city is Berlin. Germany covers an area of 357,021 km2 and has a largely temperate seasonal climate...
attacks during World War II
World War II
World War II, or the Second World War , was a global conflict lasting from 1939 to 1945, involving most of the world's nations—including all of the great powers—eventually forming two opposing military alliances: the Allies and the Axis...
.