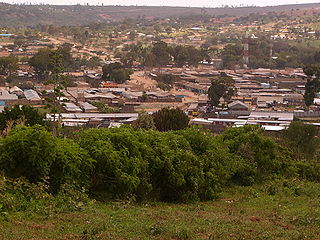 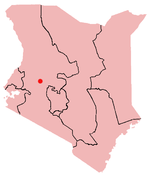 Maralal is a small hillside market town
Market town
Market town or market right is a legal term, originating in the medieval period, for a European settlement that has the right to host markets, distinguishing it from a village and city...
in northern Kenya
Kenya
Kenya , officially known as the Republic of Kenya, is a country in East Africa that lies on the equator, with the Indian Ocean to its south-east...
, lying east of the Loroghi Plateau within the Samburu District
Samburu District
Samburu District is a district in Rift Valley Province, Kenya. It covers an area of roughly 21,000 km² in northern Kenya where the Samburu tribe live...
. It is the administrative headquarters of the Samburu
Samburu
The Samburu are a Nilotic people of north-central Kenya that are related to but distinct from the Maasai. The Samburu are semi-nomadic pastoralists who herd mainly cattle but also keep sheep, goats and camels. The name they use for themselves is Lokop or Loikop, a term which may have a variety of...
people. The town has an urban population of 16,281 (1999 census http://treasury.go.ke/cbs.go.ke/pdf/authority.pdf). The market
Market
A market is one of many varieties of systems, institutions, procedures, social relations and infrastructures whereby parties engage in exchange. While parties may exchange goods and services by barter, most markets rely on sellers offering their goods or services in exchange for money from buyers...
was pioneered by some Somali
Somalia
Somalia , officially the Somali Republic and formerly known as the Somali Democratic Republic under Socialist rule, is a country located in the Horn of Africa. Since the outbreak of the Somali Civil War in 1991 there has been no central government control over most of the country's territory...
settlers in the 1920s.