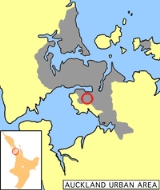 Overview
Māngere is one of the larger suburb
Suburb
The word suburb mostly refers to a residential area, either existing as part of a city or as a separate residential community within commuting distance of a city . Some suburbs have a degree of administrative autonomy, and most have lower population density than inner city neighborhoods...
s in South Auckland
South Auckland
South Auckland is an imprecisely defined area of Auckland, New Zealand, often stereotyped as a socio-economically disadvantaged, and sometimes rough, urban area with a relatively large Polynesian and Māori population. The name South Auckland is not an official place name but is in common use by New...
, in northern New Zealand
New Zealand
New Zealand is an island country in the south-western Pacific Ocean comprising two main landmasses and numerous smaller islands. The country is situated some east of Australia across the Tasman Sea, and roughly south of the Pacific island nations of New Caledonia, Fiji, and Tonga...
.

It has four major sub-areas; Māngere Bridge, Māngere Central and Māngere East, with the fourth, Favona
Favona
Favona is mostly industry-dominated suburb of Auckland, New Zealand, and is part of the Mangere area. The suburb is in the Manukau ward, one of the thirteen administrative divisions of Auckland city, and is under governance of the Auckland Council....
in the east, sometimes counted as part of Māngere as well.