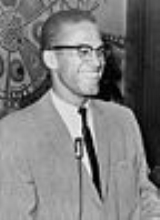 Overview
Malcolm X born Malcolm Little and also known as El-Hajj Malik El-Shabazz , was an African American
African American
African Americans are citizens or residents of the United States who have at least partial ancestry from any of the native populations of Sub-Saharan Africa and are the direct descendants of enslaved Africans within the boundaries of the present United States...
Muslim minister and human rights activist. To his admirers he was a courageous advocate for the rights of African Americans, a man who indicted white America in the harshest terms for its crimes against black Americans. Detractors accused him of preaching racism, black supremacy
Black supremacy
The term black supremacy is a blanket term for various ideologies which hold that black people are superior to people of other races.-Overview:...
, antisemitism, and violence.

I don't see any American dream; I see an American nightmare.

I'm nonviolent with those who are nonviolent with me. But when you drop that violence on me, then you've made me go insane, and I'm not responsible for what I do. And that's the way every Negro should get. Any time you know you're within the law, within your legal rights, within your moral rights, in accord with justice, then die for what you believe in. But don't die alone. Let your dying be reciprocal. This is what is meant by equality. What's good for the goose is good for the gander.

You and I, 22 million African-Americans — that's what we are — Africans who are in America. You're nothing but Africans. Nothing but Africans. In fact, you'd get farther calling yourself African instead of Negro. Africans don't catch hell. You're the only one catching hell. They don't have to pass civil-rights bills for Africans.

The government has failed us; you can’t deny that. Anytime you live in the twentieth century, 1964, and you walkin' around here singing “We Shall Overcome,” the government has failed us. This is part of what’s wrong with you — you do too much singing. Today it’s time to stop singing and start swinging. You can’t sing up on freedom, but you can swing up on some freedom.