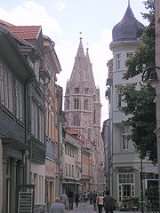 Encyclopedia
Mühlhausen is a city
City
A city is a relatively large and permanent settlement. Although there is no agreement on how a city is distinguished from a town within general English language meanings, many cities have a particular administrative, legal, or historical status based on local law.For example, in the U.S...
in the federal state of Thuringia
Thuringia
The Free State of Thuringia is a state of Germany, located in the central part of the country.It has an area of and 2.29 million inhabitants, making it the sixth smallest by area and the fifth smallest by population of Germany's sixteen states....
, Germany
Germany
Germany , officially the Federal Republic of Germany , is a federal parliamentary republic in Europe. The country consists of 16 states while the capital and largest city is Berlin. Germany covers an area of 357,021 km2 and has a largely temperate seasonal climate...
. It is the capital of the Unstrut-Hainich
Unstrut-Hainich
Unstrut-Hainich is a Kreis in the north of Thuringia, Germany. Neighboring districts are the districts Eichsfeld, Kyffhäuserkreis, Sömmerda, Gotha, Wartburgkreis and the district Werra-Meißner in Hesse.-History:...
district, and lies along the river Unstrut
Unstrut
The Unstrut is a river in Germany and a left tributary of the Saale. It originates in northern Thuringia near Dingelstädt and its catchment area is the whole of the Thuringian Basin...
. Mühlhausen had c. 37,000 inhabitants in 2006. 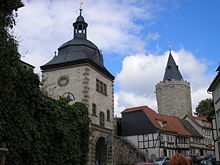 Mühlhausen is one of the oldest towns in Thuringia. It said to have been fortified in 925, and is first documented in 967 as an Ottonian village. Its early importance is shown by the grant of privileges made to it by the German King Henry the Fowler (876–936), and by the Imperial Diet
Diet (assembly)
In politics, a diet is a formal deliberative assembly. The term is mainly used historically for the Imperial Diet, the general assembly of the Imperial Estates of the Holy Roman Empire, and for the legislative bodies of certain countries.-Etymology:...
held here in 1135. Its period of glory was the 13th through the 15th century.

During the Reformation
Protestant Reformation
The Protestant Reformation was a 16th-century split within Western Christianity initiated by Martin Luther, John Calvin and other early Protestants. The efforts of the self-described "reformers", who objected to the doctrines, rituals and ecclesiastical structure of the Roman Catholic Church, led...
, Mühlhausen became one of the chief seats of the Anabaptist
Anabaptist
Anabaptists are Protestant Christians of the Radical Reformation of 16th-century Europe, and their direct descendants, particularly the Amish, Brethren, Hutterites, and Mennonites....
s. The radical reformer Thomas Müntzer preached in the Church of Saint Mary in 1525, and was captured in the vicinity and executed in the town.

Internal dissensions and injuries received during the Thirty Years' War
Thirty Years' War
The Thirty Years' War was fought primarily in what is now Germany, and at various points involved most countries in Europe. It was one of the most destructive conflicts in European history....
(1618–1648) and the Seven Years' War
Seven Years' War
The Seven Years' War was a global military war between 1756 and 1763, involving most of the great powers of the time and affecting Europe, North America, Central America, the West African coast, India, and the Philippines...
(1756–1763) reduced Mühlhausen to unimportance. In 1802 it lost its independence and passed to Prussia
Prussia
Prussia was a German kingdom and historic state originating out of the Duchy of Prussia and the Margraviate of Brandenburg. For centuries, the House of Hohenzollern ruled Prussia, successfully expanding its size by way of an unusually well-organized and effective army. Prussia shaped the history...
. In 1807 it was attached to the Kingdom of Westphalia
Kingdom of Westphalia
The Kingdom of Westphalia was a new country of 2.6 million Germans that existed from 1807-1813. It included of territory in Hesse and other parts of present-day Germany. While formally independent, it was a vassal state of the First French Empire, ruled by Napoleon's brother Jérôme Bonaparte...
, but in 1815 it again became part of the Prussian Province of Saxony
Province of Saxony
The Province of Saxony was a province of the Kingdom of Prussia and later the Free State of Prussia from 1816 until 1945. Its capital was Magdeburg.-History:The province was created in 1816 out of the following territories:...
.

From 1944 to March 1945, a women's slave labor camp was directly outside Mühlhausen (a branch of the Buchenwald camp). The women were deported in April 1945 to Bergen Belsen.

The city of Mühlhausen consists of five districts:

Mühlhausen is twinned
Town twinning
Twin towns and sister cities are two of many terms used to describe the cooperative agreements between towns, cities, and even counties in geographically and politically distinct areas to promote cultural and commercial ties.- Terminology :...
with: Tourcoing
Tourcoing
Tourcoing is a city in northern France. It is designated municipally as a commune within the département of Nord.Tourcoing is situated near the cities of Lille and Roubaix and the Belgian border.-Main sights:...
, France
France
The French Republic , The French Republic , The French Republic , (commonly known as France , is a unitary semi-presidential republic in Western Europe with several overseas territories and islands located on other continents and in the Indian, Pacific, and Atlantic oceans. Metropolitan France...
Eschwege
Eschwege
Eschwege , the district seat of the Werra-Meißner-Kreis, is a town in northeastern Hesse, Germany.- Location :The town lies on a broad plain tract of the river Werra at the foot of the Leuchtberg northwest of the Schlierbachswald and east of the Hoher Meißner...
, Germany
Germany
Germany , officially the Federal Republic of Germany , is a federal parliamentary republic in Europe. The country consists of 16 states while the capital and largest city is Berlin. Germany covers an area of 357,021 km2 and has a largely temperate seasonal climate...
Münster
Münster
Münster is an independent city in North Rhine-Westphalia, Germany. It is located in the northern part of the state and is considered to be the cultural centre of the Westphalia region. It is also capital of the local government region Münsterland...
, Germany Kronstadt
Kronstadt
Kronstadt , also spelled Kronshtadt, Cronstadt |crown]]" and Stadt for "city"); is a municipal town in Kronshtadtsky District of the federal city of St. Petersburg, Russia, located on Kotlin Island, west of Saint Petersburg proper near the head of the Gulf of Finland. Population: It is also...
, Russia
Russia
Russia or , officially known as both Russia and the Russian Federation , is a country in northern Eurasia. It is a federal semi-presidential republic, comprising 83 federal subjects...
Saxonburg
Saxonburg, Pennsylvania
Saxonburg is a borough in Butler County, Pennsylvania, United States. The population was 1,629 as of the 2000 census.- History :Founded in 1832 by John A...
, USA