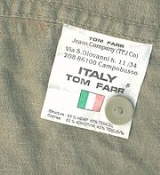 Overview
Lyocell is a regenerated cellulose fiber
Cellulose fiber
Cellulose fibers are fibres of cellulose from any source, either natural or manufactured.-Textile:In the textile industry regenerated cellulose is used as fibers such as rayon, . Cellulose fibers are manufactured from dissolving pulp...
made from dissolving pulp
Dissolving pulp
Dissolving pulp is a bleached wood pulp that has a high cellulose content . It is produced chemically from the pulpwood, in a process that has a low yield...
(bleached wood pulp). It was first manufactured in 1987 by Courtaulds
Courtaulds
Courtaulds was a United Kingdom-based manufacturer of fabric, clothing, artificial fibres, and chemicals.-Foundation:The Company was founded by George Courtauld and his cousin Peter Taylor in 1794 as a silk, crepe and textile business at Pebmarsh in north Essex trading as George Courtauld & Co...
Fibres UK at their pilot plant S25. it is manufactured by Lenzing AG
Lenzing AG
Lenzing AG is a company based in Lenzing, Austria whose main business is textile and nonwovens cellulose fibers and also makes some polymer plastics...
of Lenzing
Lenzing
Lenzing is a small town of approximately 5000 residents, three kilometers north of Lake Attersee in Austria, It is located in the Upper Austrian part of the Salzkammergut....
, Austria
Austria
Austria , officially the Republic of Austria , is a landlocked country of roughly 8.4 million people in Central Europe. It is bordered by the Czech Republic and Germany to the north, Slovakia and Hungary to the east, Slovenia and Italy to the south, and Switzerland and Liechtenstein to the...
, under the brand name "Lyocell by Lenzing", and under the brand name Tencel by the Tencel group, now owned by Lenzing AG.

Does it breath?
More
x