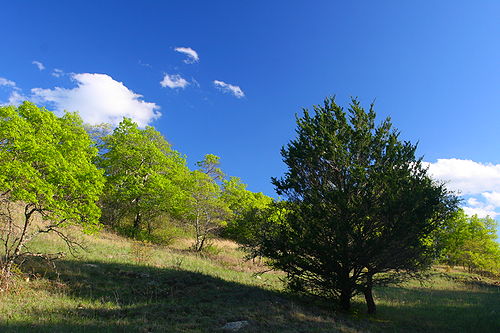 Lyndon B. Johnson National Grassland is a National Grassland located in the Great Plains
Great Plains
The Great Plains are a broad expanse of flat land, much of it covered in prairie, steppe and grassland, which lies west of the Mississippi River and east of the Rocky Mountains in the United States and Canada. This area covers parts of the U.S...
of the northern part of the U.S. state
U.S. state
A U.S. state is any one of the 50 federated states of the United States of America that share sovereignty with the federal government. Because of this shared sovereignty, an American is a citizen both of the federal entity and of his or her state of domicile. Four states use the official title of...
of Texas
Texas
Texas is the second largest U.S. state by both area and population, and the largest state by area in the contiguous United States.The name, based on the Caddo word "Tejas" meaning "friends" or "allies", was applied by the Spanish to the Caddo themselves and to the region of their settlement in...
near Decatur
Decatur, Texas
Decatur is a city located in Wise County, Texas, United States. This city was named after Stephen Decatur, Jr. The population was 5,201 at the 2000 census. A July 1, 2008 U.S. Census Bureau estimate placed the population at 6,432. It is the county seat of Wise County...
and within an hour's drive from Fort Worth
Fort Worth, Texas
Fort Worth is the 16th-largest city in the United States of America and the fifth-largest city in the state of Texas. Located in North Central Texas, just southeast of the Texas Panhandle, the city is a cultural gateway into the American West and covers nearly in Tarrant, Parker, Denton, and...
. It is primarily used for recreation such as hiking, camping, horseback riding, fishing and hunting. It is also used as grazing land for cattle and other livestock.

Camping and other activities are free of charge, and visitors may camp in virtually any area of the park. Both pull-through and hike-in campsites are available. Some areas require a small fee for use, but these are few and clearly marked.