Encyclopedia
Lyminge is a village in southeast Kent
Kent
Kent is a county in southeast England, and is one of the home counties. It borders East Sussex, Surrey and Greater London and has a defined boundary with Essex in the middle of the Thames Estuary. The ceremonial county boundaries of Kent include the shire county of Kent and the unitary borough of...
, England
England
England is a country that is part of the United Kingdom. It shares land borders with Scotland to the north and Wales to the west; the Irish Sea is to the north west, the Celtic Sea to the south west, with the North Sea to the east and the English Channel to the south separating it from continental...
. It lies about five miles (8 km) from Folkestone
Folkestone
Folkestone is the principal town in the Shepway District of Kent, England. Its original site was in a valley in the sea cliffs and it developed through fishing and its closeness to the Continent as a landing place and trading port. The coming of the railways, the building of a ferry port, and its...
and the Channel Tunnel
Channel Tunnel
The Channel Tunnel is a undersea rail tunnel linking Folkestone, Kent in the United Kingdom with Coquelles, Pas-de-Calais near Calais in northern France beneath the English Channel at the Strait of Dover. At its lowest point, it is deep...
, on the road passing through the Elham Valley
Elham Valley
The Elham Valley is a chalk valley carved by the River Nailbourne situated in the North Downs in East Kent. The valley is named after the settlement of Elham...
. The Nailbourne
Little Stour
The Little Stour is one of the tributaries of the River Stour in the English county of Kent. The upper reaches of the river are better known as the Nailbourne, whilst the lower reaches were once known as the Seaton Navigation....
stream begins in the village and flows north through the Valley, to become one of the tributary streams of the Great Stour
River Stour, Kent
The River Stour is the river in Kent, England that flows into the English Channel at Pegwell Bay. Above Plucks Gutter, where the Little Stour joins it, the river is normally known as the Great Stour. The upper section of the river, above its confluence with the East Stour at Ashford is sometimes...
. The hamlet
Hamlet (place)
A hamlet is usually a rural settlement which is too small to be considered a village, though sometimes the word is used for a different sort of community. Historically, when a hamlet became large enough to justify building a church, it was then classified as a village...
of Ottinge
Ottinge
Ottinge is a hamlet located NNW of Folkestone in Kent, England. It lies less than one mile from the village of Lyminge and occupies a site at a crossroads between that village and Elham....
lies to the NE on the road to Elham
Elham
Elham is a village in East Kent situated approximately south of Canterbury and north east of Folkestone in the Elham Valley.-Toponomy:The origin of the village's name has always been a matter of argument. The village is listed in the Domesday Book of 1086 as Alham. This may have derived from...
.

Lyminge has a vibrant pub, a school, a post office, a hairdresser, a thriving coffee shop, a grocery store, and many other shops and services. This is largely due to the large elderly population in the village, of whom many do not drive. The sense of community is also felt within the monthly newsletter, paid for by advertisements from local businesses, detailing the various events and clubs within the local area.

Lyminge also has an Age Concern Centre which offers services to older people in an area covering some 60 square miles (155.4 km²) of rural countyside.

Lyminge also boasts a play school given an outstanding grade for one of four criteria in a recent Ofsted report. 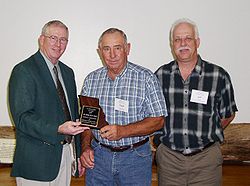 The Elham Valley Railway
Elham Valley Railway
The Elham Valley Railway is a disused railway line that runs through the Elham Valley connecting Folkestone and Canterbury in East Kent. It was operational from 1887 to 1947.- History :...
ran from Canterbury
Canterbury
Canterbury is a historic English cathedral city, which lies at the heart of the City of Canterbury, a district of Kent in South East England. It lies on the River Stour....
to Folkestone
Folkestone
Folkestone is the principal town in the Shepway District of Kent, England. Its original site was in a valley in the sea cliffs and it developed through fishing and its closeness to the Continent as a landing place and trading port. The coming of the railways, the building of a ferry port, and its...
through the village from 1887 until eventually closing in 1947 Because of running costs. The station building exists today as the library, situated in The Sidings, off Station Road. 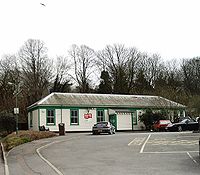 Lyminge has been a focus of archaeological work for over a half a century. In December 1953 two inhumation burials were discovered there by workmen working for farming contractors and subsequent excavations led by Alan Warhurst resulted in the discovery of a 6th century Jutish cemetery containing 44 graves. The grave assemblages were remarkable, although not unusual for this period, and contained a lot of high status jewellery, weapons such as spear-heads, swords and shield bosses and some rare glass claw beakers of exceptional quality and condition. Excavations are now being led by Dr. Gabor Thomas of the University of Reading and continue to contribute to the field of archaeology.

One of the oldest standing structures in the village is the Parish Church of St Mary and St Ethelburga. This beautiful Church has stood since 633AD and is still very active today, looking after the needs of the community. Unfortunately, in 2010 the lead had to be replaced after thieves stole it to sell. It has a rich and varied history which can be read on their website - see below.