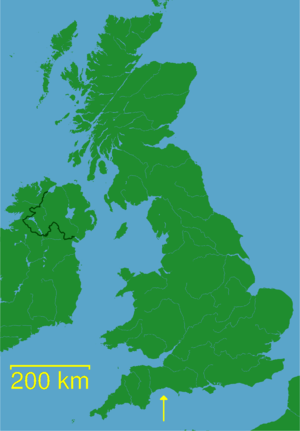 Lyme Bay is an area of the English Channel
English Channel
The English Channel , often referred to simply as the Channel, is an arm of the Atlantic Ocean that separates southern England from northern France, and joins the North Sea to the Atlantic. It is about long and varies in width from at its widest to in the Strait of Dover...
situated in the southwest of England between Torbay
Torbay
Torbay is an east-facing bay and natural harbour, at the western most end of Lyme Bay in the south-west of England, situated roughly midway between the cities of Exeter and Plymouth. Part of the ceremonial county of Devon, Torbay was made a unitary authority on 1 April 1998...
in the west and Portland
Isle of Portland
The Isle of Portland is a limestone tied island, long by wide, in the English Channel. Portland is south of the resort of Weymouth, forming the southernmost point of the county of Dorset, England. A tombolo over which runs the A354 road connects it to Chesil Beach and the mainland. Portland and...
in the east. The counties of Devon
Devon
Devon is a large county in southwestern England. The county is sometimes referred to as Devonshire, although the term is rarely used inside the county itself as the county has never been officially "shired", it often indicates a traditional or historical context.The county shares borders with...
and Dorset
Dorset
Dorset , is a county in South West England on the English Channel coast. The county town is Dorchester which is situated in the south. The Hampshire towns of Bournemouth and Christchurch joined the county with the reorganisation of local government in 1974...
front onto the bay,

Many of the earliest discoveries of dinosaur
Dinosaur
Dinosaurs are a diverse group of animals of the clade and superorder Dinosauria. They were the dominant terrestrial vertebrates for over 160 million years, from the late Triassic period until the end of the Cretaceous , when the Cretaceous–Paleogene extinction event led to the extinction of...
and other prehistoric reptile
Reptile
Reptiles are members of a class of air-breathing, ectothermic vertebrates which are characterized by laying shelled eggs , and having skin covered in scales and/or scutes. They are tetrapods, either having four limbs or being descended from four-limbed ancestors...
remains were in the area surrounding Lyme Regis
Lyme Regis
Lyme Regis is a coastal town in West Dorset, England, situated 25 miles west of Dorchester and east of Exeter. The town lies in Lyme Bay, on the English Channel coast at the Dorset-Devon border...
and Charmouth
Charmouth
Charmouth is a village at the mouth of the River Char in West Dorset, England, with a population of 1,687 according to the 2001 census.-The village:...
. Notable among these were the discoveries made by self-educated palaeontologist
Paleontology
Paleontology "old, ancient", ὄν, ὀντ- "being, creature", and λόγος "speech, thought") is the study of prehistoric life. It includes the study of fossils to determine organisms' evolution and interactions with each other and their environments...
and fossil collector Mary Anning
Mary Anning
Mary Anning was a British fossil collector, dealer and palaeontologist who became known around the world for a number of important finds she made in the Jurassic age marine fossil beds at Lyme Regis where she lived...
, in the 1820s.

The weather in the bay is temperate by English standards, and far more temperate than many other places at a similar latitude. The reason for this is the warming action of the Gulf Stream
Gulf Stream
The Gulf Stream, together with its northern extension towards Europe, the North Atlantic Drift, is a powerful, warm, and swift Atlantic ocean current that originates at the tip of Florida, and follows the eastern coastlines of the United States and Newfoundland before crossing the Atlantic Ocean...
. The area along the coast of Lyme Bay is thus a popular holiday destination. On 22 March 1993, four schoolchildren died in what is known as the Lyme Bay kayaking tragedy.

Lyme Bay was the site of Exercise Tiger
Exercise Tiger
Exercise Tiger, or Operation Tiger, were the code names for a full-scale rehearsal in 1944 for the D-Day invasion of Normandy. During the exercise, an Allied convoy was attacked, resulting in the deaths of 946 American servicemen....
, a practice run for the D-Day invasion of France in 1944, using the beach called Slapton Sands near Slapton, Devon
Slapton, Devon
Slapton is a village in Devon, England. It is located near the A379 road between Kingsbridge and Dartmouth, and lies within the South Devon Area of Outstanding Natural Beauty . In 2001 the population of the civil parish of Slapton was 473...
as the practice landing area. The operation went horribly wrong when German E-boats appeared on the scene and killed 749 American Army
United States Army
The United States Army is the main branch of the United States Armed Forces responsible for land-based military operations. It is the largest and oldest established branch of the U.S. military, and is one of seven U.S. uniformed services...
and Navy
United States Navy
The United States Navy is the naval warfare service branch of the United States Armed Forces and one of the seven uniformed services of the United States. The U.S. Navy is the largest in the world; its battle fleet tonnage is greater than that of the next 13 largest navies combined. The U.S...
personnel in the middle of the bay.

Tank wrecks from the D-Day practice provide a venue for diving
Underwater diving
Underwater diving is the practice of going underwater, either with breathing apparatus or by breath-holding .Recreational diving is a popular activity...
. Marine life includes the Devon cup coral (Caryophyllia smithii) and rare pink sea fan (Eunicella verrucosa). The reefs have been under threat from scallop dredging which, if unregulated, might destroy the coral's habitat. Devon Wildlife Trust
Devon Wildlife Trust
The Devon Wildlife Trust is a member of The Wildlife Trusts partnership covering the county of Devon, England. It is a registered charity, established in 1962 as the Devon Naturalists Trust, and its aim is to safeguard the future of the county's urban, rural and marine wildlife and its...
has been campaigning to protect the reefs, calling for an end to the dredging and trawling within a 60 square miles (155.4 km²) zone to help the reefs recover. About 20% of this area is now protected by a voluntary agreement made between the DEFRA and the fishermen of the South West Inshore Fishermen's Association.