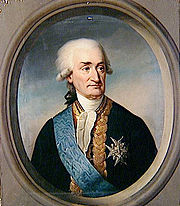 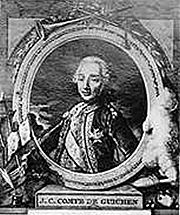 Luc Urbain de Bouëxic, comte de Guichen (June 21, 1712, Fougères
Fougères
Fougères is a commune and a sub-prefecture of the Ille-et-Vilaine department in Brittany, in north-western France.-Sights:Fougères' major monument is a medieval stronghold built atop a granite ledge, which was part of the ultimately unsuccessful defence system of the Duchy of Brittany against...
, Ille-et-Vilaine
Ille-et-Vilaine
Ille-et-Vilaine is a department of France, located in the region of Brittany in the northwest of the country.- History :Ille-et-Vilaine is one of the original 83 departments created during the French Revolution on March 4, 1790...
– January 13, 1790) - French
France
The French Republic , The French Republic , The French Republic , (commonly known as France , is a unitary semi-presidential republic in Western Europe with several overseas territories and islands located on other continents and in the Indian, Pacific, and Atlantic oceans. Metropolitan France...
admiral
Admiral
Admiral is the rank, or part of the name of the ranks, of the highest naval officers. It is usually considered a full admiral and above vice admiral and below admiral of the fleet . It is usually abbreviated to "Adm" or "ADM"...
; entered the navy in 1730 as "garde de la Marine," the first rank in the corps of royal officers.

His promotion was not rapid. It was not till 1746 that he became "lieutenant de vaisseau", which was, however, a somewhat higher rank than the lieutenant
Lieutenant
A lieutenant is a junior commissioned officer in many nations' armed forces. Typically, the rank of lieutenant in naval usage, while still a junior officer rank, is senior to the army rank...
in the British navy, since it carried with it the right to command a frigate
Frigate
A frigate is any of several types of warship, the term having been used for ships of various sizes and roles over the last few centuries.In the 17th century, the term was used for any warship built for speed and maneuverability, the description often used being "frigate-built"...
. He was promoted "capitaine de vaisseau", or post captain, in May 1756. But his reputation must have been good, for he was made chevalier de Saint Louis in 1748. In that year de Guichen had fought no fewer than five battles against superior British forces, while escorting back to France, from the Antilles a huge convoy. In 1755 he participated in the abortive relief expedition to Louisbourg under Dubois de La Motte, and was involved, onboard L'Heros 70 off Louisbourg. In 1775 he was appointed to the frigate Terpsichore, attached to the training squadron, in which the duc de Chartres, afterwards notorious as the duc d'Orléans and as Philippe Egalité, was entered as volunteer. In the next year he was promoted Chef d'Escadre
Chef d'escadre
In the ancien Régime French Navy, the rank of chef d'escadre was equivalent to the present-day rank of rear admiral. It was replaced in 1791 by the rank of "contre-amiral" ....
, or Rear-Admiral.

When France had become the ally of the Americans in the War of Independence, he hoisted his flag in the Channel fleet, and was present at the battle of Ushant on 27 July 1778, where his flagship, La Ville de Paris
French ship Ville de Paris (1764)
The Ville de Paris was a large three-decker French ship of the line that became famous as the flagship of the Comte de Grasse during the American Revolutionary War....
(90 guns) took station just abaft the fleet-flagship, La Bretagne
French ship Bretagne (1766)
The Bretagne was a large 110-gun three-decker French ship of the line, built at Brest, which became famous as the flagship of the Brest Fleet during the American War of Independence....
, and several times fought off both Keppel, Palliser and other determined English assailants. For this deed he and his crew received the 'Cordon Rouge' for outstanding valour. In March 1779 he was promoted Lieutenant Général des Armées Navales, or roughly corresponding to the British Vice-Admiral of the White and Red and Admiral
Admiral
Admiral is the rank, or part of the name of the ranks, of the highest naval officers. It is usually considered a full admiral and above vice admiral and below admiral of the fleet . It is usually abbreviated to "Adm" or "ADM"...
of the Blue and White. As such he commanded the French van in the Combined fleet of Comte d'Orvillers and Don Luis de Córdoba y Córdoba that year (June-September).

In January of the following year he was sent to the West Indies with a strong squadron and was there opposed to Sir George Rodney. In the first meeting between them on April 17 to the leeward of Martinique
Martinique
Martinique is an island in the eastern Caribbean Sea, with a land area of . Like Guadeloupe, it is an overseas region of France, consisting of a single overseas department. To the northwest lies Dominica, to the south St Lucia, and to the southeast Barbados...
, Guichen escaped disaster only through the clumsy manner in which Sir George's orders were executed by his captains. But, thanks to the orderly fashion in which his own subordinate squadron-commanders dealt with the crisis, especially the third-in-command François-Joseph Paul, Comte de Grasse-Tilly's rapid closing-up of the battle-line, de Guichen managed to extricate himself from a difficult situation and, instead turn a narrow defeat to a drawn battle, although his and Marquis de Bouillé's objective to attack and seize Jamaica were cancelled. During that battle, both Rodney's Sandwich (90 guns) as well as de Guichen' own La Couronne (80 guns) had been temporarily cut off from their respective fleets and had borne the burnt of the battle. Realizing he had to deal with a formidable opponent, de Guichen acted with extreme caution, and by keeping the weather gauge afforded the British admiral no chance of bringing him to close action.

The following two actions, 15 May, 19 May also off Dominica and Martinique were set-pieces of masterly fleet handling which Rodney could not parallel, but inconclusive, although the French had the better of them. In conjunction with the battle of the 17 April, these battles are called Les Trois Combats de Mons. de Guichen in the French naval annals.

When the hurricane months approached (July to September) he left the West Indies, and his squadron, being in a bad state from want of repairs, returned home, reaching Cadiz in September, bringing with him a convoy of 95 merchants. On that roadstead his able second-in-command, H.-A., Comte de Sade, a maternal cousin of the infamous 'Marquis' de Sade, died at age 69. Previously de Guichen, himself had suffered a personal loss, by the death of his eldest son, Luc, Chevalier de Guichen through tropical fever.

Throughout all this campaign Guichen had shown himself very skilful in handling a fleet, and if he had not gained any marked success, he had prevented the British admiral from doing any harm to the French islands in the Antilles
Antilles
The Antilles islands form the greater part of the West Indies in the Caribbean Sea. The Antilles are divided into two major groups: the "Greater Antilles" to the north and west, including the larger islands of Cuba, Jamaica, Hispaniola , and Puerto Rico; and the smaller "Lesser Antilles" on the...
. In December 1781 the comte de Guichen was chosen to command the force which was entrusted with the duty of carrying stores and reinforcements to the West Indies. On the 12th Admiral Kempenfelt
Richard Kempenfelt
Richard Kempenfelt was a British rear-admiral who gained a reputation as a naval innovator. He is best known for his victory against the French at the Second Battle of Ushant and for his death when the HMS Royal George accidentally sank at Portsmouth the following year.He was born at Westminster...
, who had been sent out by the British Government with an unduly weak force to intercept him, sighted the French admiral in the Bay of Biscay
Bay of Biscay
The Bay of Biscay is a gulf of the northeast Atlantic Ocean located south of the Celtic Sea. It lies along the western coast of France from Brest south to the Spanish border, and the northern coast of Spain west to Cape Ortegal, and is named in English after the province of Biscay, in the Spanish...
through a temporary clearance in a fog, at a moment when Guichen's warships were to leeward of the convoy, and attacked the transports at once. The French admiral could not prevent his enemy from capturing twenty of the transports, and driving the others into a panic-stricken flight. They returned to port, and the mission entrusted to Guichen was entirely defeated. He therefore returned to port also. He had no opportunity to gain any counterbalancing success during the short remainder of the war, but he was present at the final relief of Gibraltar
Gibraltar
Gibraltar is a British overseas territory located on the southern end of the Iberian Peninsula at the entrance of the Mediterranean. A peninsula with an area of , it has a northern border with Andalusia, Spain. The Rock of Gibraltar is the major landmark of the region...
by Lord Howe.

The comte de Guichen was, by the testimony of his contemporaries, a most accomplished, valorous, brave and high-minded gentleman. It is probable that he had more scientific knowledge than any of his English contemporaries and opponents. But as a commander in war he was notable chiefly for his skill in directing the orderly movements of a fleet, and seems to have been satisfied with formal operations, which were possibly elegant but could lead to no substantial result. He had none of the combative instincts of his countryman Suffren
Pierre André de Suffren de Saint Tropez
Admiral comte Pierre André de Suffren de Saint Tropez, bailli de Suffren , French admiral, was the third son of the marquis de Saint Tropez, head of a family of nobles of Provence which claimed to have emigrated from Lucca in the 14th century...
, or of the average British admiral.