Encyclopedia
A low tension coil is an electrical device used to create a spark
Electric spark
An electric spark is a type of electrostatic discharge that occurs when an electric field creates an ionized electrically conductive channel in air producing a brief emission of light and sound. A spark is formed when the electric field strength exceeds the dielectric field strength of air...
across the points of an ignitor
Ignitor
Ignitor is a heavy metal band based in Austin, Texas, USA.- History :Ignitor was formed in 2003 by Erika Tandy , Stuart Laurence aka Batlord , Pat Doyle , Beverly Barrington , and Brendon Bigelow...
on early 1900s gasoline
Gasoline
Gasoline , or petrol , is a toxic, translucent, petroleum-derived liquid that is primarily used as a fuel in internal combustion engines. It consists mostly of organic compounds obtained by the fractional distillation of petroleum, enhanced with a variety of additives. Some gasolines also contain...
engines, generally flywheel engines, hit and miss engine
Hit and miss engine
A hit-and-miss engine is a type of four-stroke internal combustion engine that was conceived in the late 19th century and was produced by various companies from the 1890s through approximately the 1930s. The name comes from the method of speed control that is implemented on these engines...
s, and other engines of that era. In modern electronic terms, a low tension coil is simply a large inductor
Inductor
An inductor is a passive two-terminal electrical component used to store energy in a magnetic field. An inductor's ability to store magnetic energy is measured by its inductance, in units of henries...
, an electrical device that stores energy for brief periods. The term "low tension" was the terminology of the day used to differentiate it from the term "high tension", and generally meant "low voltage" (tension) as opposed to "high voltage" (tension). High tension coils produce high voltages, generally meant to produce a spark across a spark plug. 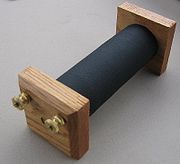 A low tension coil consists of an iron core that has wire wrapped around it. The size of the iron core, the number of turns of wire, and the size of the wire determine the electrical properties of the coil. Terminals are provided to connect the coil into the ignition circuit. The wood ends are provided for mechanical stability, to provide for the terminal placement and to hold the wire on the coil over time. A cloth or tape covering is provided to protect the windings.