Encyclopedia
Lovech Province is one of the 28 provinces
Provinces of Bulgaria
Since 1999, Bulgaria has been divided into 28 provinces which correspond approximately to the 28 districts that existed before 1987. In 1987, during the Communist regime of Todor Zhivkov, the districts were consolidated into nine larger provinces , which survived until 1999.Each province is named...
of Bulgaria
Bulgaria
Bulgaria , officially the Republic of Bulgaria , is a parliamentary democracy within a unitary constitutional republic in Southeast Europe. The country borders Romania to the north, Serbia and Macedonia to the west, Greece and Turkey to the south, as well as the Black Sea to the east...
, lying at the northern centre of the country. It is named after its main city - Lovech
Lovech
Lovech is a town in north-central Bulgaria with a population of 36,296 as of February 2011. It is the administrative centre of the Lovech Province and of the subordinate Lovech Municipality. The town is located about 150 km northeast from the capital city of Sofia...
. As of December 2009, the population of the area is 151,153.

The Lovech province (област, oblast) contains eight municipalities (singular: oбщина, obshtina - plural: общини, obshtini). The following table shows the names of each municipality in English and Cyrillic, the main town or village (in bold), and the population as of December 2009.

The Lovech province had a population
Population
A population is all the organisms that both belong to the same group or species and live in the same geographical area. The area that is used to define a sexual population is such that inter-breeding is possible between any pair within the area and more probable than cross-breeding with individuals...
of 169,951 according to a 2001 census
Census
A census is the procedure of systematically acquiring and recording information about the members of a given population. It is a regularly occurring and official count of a particular population. The term is used mostly in connection with national population and housing censuses; other common...
, of which were male
Male
Male refers to the biological sex of an organism, or part of an organism, which produces small mobile gametes, called spermatozoa. Each spermatozoon can fuse with a larger female gamete or ovum, in the process of fertilization...
and were female
Female
Female is the sex of an organism, or a part of an organism, which produces non-mobile ova .- Defining characteristics :The ova are defined as the larger gametes in a heterogamous reproduction system, while the smaller, usually motile gamete, the spermatozoon, is produced by the male...
.
As of the end of 2009, the population of the province, announced by the Bulgarian National Statistical Institute, numbered 151,153 of which are inhabitants aged over 60 years.
The following table represents the change of the population in the province after World War II
World War II
World War II, or the Second World War , was a global conflict lasting from 1939 to 1945, involving most of the world's nations—including all of the great powers—eventually forming two opposing military alliances: the Allies and the Axis...
: 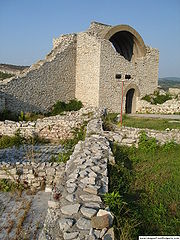 Religious adherence in the province according to 2001 census:

In the 2001 census, 168,307 people identified one of the following as their mother tongue (with percentage of total population):
154,157 Bulgarian
Bulgarian language
Bulgarian is an Indo-European language, a member of the Slavic linguistic group.Bulgarian, along with the closely related Macedonian language, demonstrates several linguistic characteristics that set it apart from all other Slavic languages such as the elimination of case declension, the...
,
6,994 Turkish
Turkish language
Turkish is a language spoken as a native language by over 83 million people worldwide, making it the most commonly spoken of the Turkic languages. Its speakers are located predominantly in Turkey and Northern Cyprus with smaller groups in Iraq, Greece, Bulgaria, the Republic of Macedonia, Kosovo,...
,
6,033 Roma (Gypsy)
Romani language
Romani or Romany, Gypsy or Gipsy is any of several languages of the Romani people. They are Indic, sometimes classified in the "Central" or "Northwestern" zone, and sometimes treated as a branch of their own....
,
and 1,123 other .

In the 2001 census, 167,877 people from Lovech province identified themselves as belonging to one of the following ethnic groups (with percentage of total population):