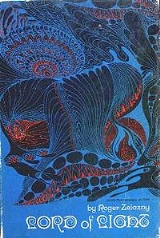 The context of the novel – modern western characters in a Hindu-Buddhist-infused world – is reflected in the book's opening lines:

The novel is structured as a series of long semi-independent chapters; each a distinct story within a long campaign by the protagonist Sam – a classic trickster
Trickster
In mythology, and in the study of folklore and religion, a trickster is a god, goddess, spirit, man, woman, or anthropomorphic animal who plays tricks or otherwise disobeys normal rules and conventional behavior. It is suggested by Hansen that the term "Trickster" was probably first used in this...
character – against the established gods of the world.

His followers called him Mahasamatman and said he was a god. He preferred to drop the Maha- and the -atman, and called himself Sam. He never claimed to be a god. But then, he never claimed not to be a god. Circumstances being what they were, neither admission could be of any benefit. Silence, though, could.

"Your prayers and your curses come to the same. Lord Yama," commented the ape. "That is to say, nothing." "It has taken you seventeen incarnations to arrive at this truth?" said Yama. "I can see then why you are still doing time as an ape."

Not by the normal course of events shall we be restored or matters settled, Tak of the Bright Spear. We must beat our own path.

Sam was the greatest charlatan in the memory of god or man. He was also the worthiest opponent Trimurti|Trimurti ever faced.

I have many names, and none of them matter.

Sam in a sermon to his followers.
More
x