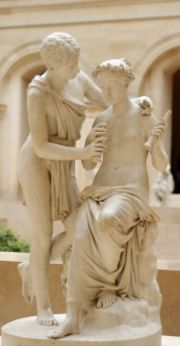 Longus, sometimes Longos , was the author of an ancient Greek novel
Ancient Greek novel
Five ancient Greek novels survive complete from antiquity: Chariton's Callirhoe, Xenophon of Ephesus' Ephesian romance, Longus' Daphnis and Chloe, Achilles Tatius' Leucippe and Clitophon and Heliodorus of Emesa's Ethiopian Romance. There are also numerous fragments preserved on papyrus or in...
or romance
Romance (genre)
As a literary genre of high culture, romance or chivalric romance is a style of heroic prose and verse narrative that was popular in the aristocratic circles of High Medieval and Early Modern Europe. They were fantastic stories about marvel-filled adventures, often of a knight errant portrayed as...
, Daphnis and Chloe
Daphnis and Chloe
Daphnis and Chloe is the only known work of the 2nd century AD Greek novelist and romancer Longus.-Setting and style:It is set on the isle of Lesbos during the 2nd century AD, which is also assumed to be the author's home. Its style is rhetorical and pastoral; its shepherds and shepherdesses are...
. Very little is known of his life, and it is assumed that he lived on the isle of Lesbos (setting for Daphnis and Chloe) during the 2nd century AD

It has been suggested that the name Longus is merely a misinterpretation of the last word of Daphnis and Chloe 's title Λεσβιακῶν ἐρωτικῶν λόγοι δ in the Florentine manuscript; Seiler also observes that the best manuscript begins and ends with λόγου (not λόγγου) ποιμενικῶν. If his name was really Longus, he was probably a freedman of some Roman family which bore that name as a cognomen
Cognomen
The cognomen nōmen "name") was the third name of a citizen of Ancient Rome, under Roman naming conventions. The cognomen started as a nickname, but lost that purpose when it became hereditary. Hereditary cognomina were used to augment the second name in order to identify a particular branch within...
.